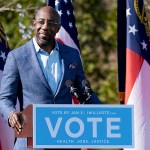 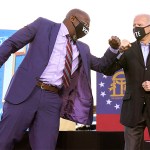 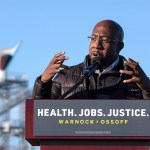 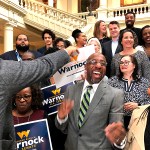 He’s here to make history. Rev. Raphael Warnock was just elected as a Dem. senator to Georgia — the 1st Black senator in Georgia history, and 11th in US history. Here’s what you need to know:

History was just made in Georgia. Raphael Warnock was elected the next Senator of Georgia on January 5, bringing the Democrats one step closer to controlling the House AND Senate in 2021. Warnock is a longtime reverend and activist who has mobilized voters in his home state for years. Here’s what you need to know about Warnock, who’s about to turn Georgia and the entire federal government blue:

1. He is Georgia’s first Black senator. Despite 3.391 Black individuals living in Georgia (or 31.9 percent of the population), there has never been a Black senator from the state. Warnock is also the first Black senator to represent a former Confederate state in United States history. Warnock will replace Republican senator Kelly Loeffler. If fellow Democrat Jon Ossoff wins his runoff election against Senator David Perdue, Democrats will take control of the Senate.

3. He’s been the Senior Pastor of Ebenezer Baptist Church since 2005. Rev. Warnock preaches at the pulpit once occupied by Martin Luther King, Jr. He’s the youngest pastor to ever serve in a leadership role at the historic church, as well. Warnock also notably delivered the benediction at President Obama’s second inauguration in 2012.

4. He’s a leader in the movement to expand Medicaid in Georgia. Warnock rose to prominence in Georgia politics during his crusade to expand Medicaid to cover all struggling Georgians. Warnock even led a sit-in at the Georgia State Capitol in 2014. to pressure state legislators to approve the expansion of Medicaid in the Patient Protection and Affordable Care Act. He and other participants were arrested.

5. His goal as senator is to help struggling Georgia families. “As Senator, Reverend Warnock will bring to Washington the concerns of struggling Georgia families who wonder why no one is looking out for them,” his campaign website reads. “He will focus on fighting for quality, affordable health care, for the dignity of working people who are paid too little as our government works more for Wall Street, and to make sure every voice is heard.”