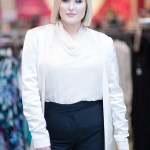 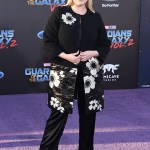 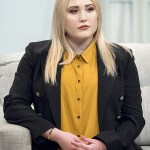 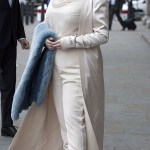 Hayley Hasselhoff has become the first ever ‘curve model’ to cover ‘Playboy’ and revealed her father David Hasselhoff has been fully ‘supportive’ of her career. Here are five things about her.

Hayley Hasselhoff, 28, is making headlines after showcasing her body as the first “curve model” to be on the cover of Playboy magazine. The daughter of actor David Hasselhoff, 68, posed topless for the iconic outlet and in an interview with Daily Mail, she revealed that she felt “empowered” while wearing her own lingerie, which included a black lacy bra and matching underwear, for other photos in the Paris shoot. “The day was fun but I look back at it more as empowering – I felt very empowered when I left set, I felt like I was grounded and had taken ownership of my body,” she explained.

“Everybody there knew it was for a bigger purpose and being able to showcase that women can be desired and loved no matter what shape or size they are,” she continued. “If you’re a size two to somebody that’s a size 16-18, your body doesn’t have to be objectified if you celebrate it in such an artful way. I am very, very proud of the photos – I think they look gorgeous.”

Here are five things you should know about Hayley and her journey as a plus size model.

“I’ve been in this industry since I was 14 and I’ve been a curve model since I was 14,” Hayley told the Daily Mail. “We all have different journeys in the curve industry but for me I started out as a curve model and I am still a curve model today.” She also acted in some roles throughout the years, including her role as Amber in the ABC Family original series Huge, which was about teens getting sent to summer weight loss camp, in 2010.

Her Parents Are Fully ‘Supportive’ In Her Career.

Her Team Had A ‘Difficult’ Time Finding Garments For Her ‘Playboy’ Shoot In The Pandemic.

She ended up having to wear her own lingerie in Paris because it was hard to find pieces that fit her UK size 16-18 frame in the midst of the coronavirus, but she embraced it and even ended up posing “tastefully nude” for some pics. “There are a few photos that are tastefully nude where I’m topless,” she told Daily Mail while discussing the experience of the shoot. “At the beginning there were pieces of me like ‘oh Playboy…’ and then I had a think and I was like ‘oh cool!’ I get to make this movement for curve women during a global pandemic and let them know they have every right to celebrate their bodies.”

“Looking at those images I have to say there were definitely moments on set where I was apprehensive because it was my first time ever shooting something like this,” she admitted. “It was one of those moments where you have a thought bubble and that apprehensiveness – but then that positive thought came back in and said ‘hold on a second that’s the whole reason you’re here today.”

She Doesn’t Agree With ‘Retouching’ Photos Of Bodies.

Hayley explained that Playboy only “amplified” her natural assets in her photos with the magazine and doesn’t think anyone’s bodies should be altered at “unhealthy lengths.”

“It’s a tricky topic for me because do I agree with retouching our bodies to unhealthy lengths that aren’t necessarily a representation of who we are? Definitely not!” she enthusiastically said. “That’s one of the best things about this shoot – looking at my body, that’s my body! And I’m like hell yeah girl, that’s you, that’s you all the way! I look at that cover and I’m like my bum looks amazing!”

Her Boyfriend Lives In The UK.

Hayley, who’s based in Los Angeles, CA, has had to spend five months away from her beau Dominic Charles Farrell due to the pandemic. “It has been hard obviously because I can’t see him but we’re good with long distance just because when we first met each other I was travelling 10 times out of the month, we got very used to being in different time zones and making it work,” she explained to the outlet. “But it’s sad and I miss him so much – he was supposed to come over here and funny enough it was a couple of days before the first major tier lockdown that I ended up leaving before Christmas time.”

“In our minds it was going to be 2-3 months we were going to be apart but now it’s turned into almost five months and there’s really no date of when we will be able to see each other again because of all this,” she continued. “I was living as a digital nomad for so many years I was traveling so much for work and wherever the wind took me and I enjoyed that and we had our house out in the UK. The pandemic has definitely put things into perspective, it made me feel that I also want a permanent place in LA where I’m from and I can build a bigger life there.”