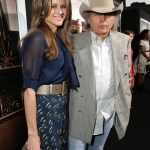 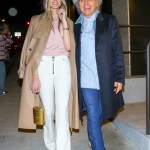 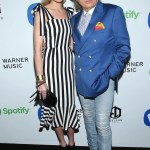 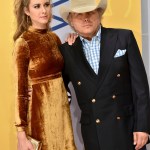 It took 10 years for Dwight Yoakum to wed girlfriend Emily Joyce, and when they did the pair took every social distancing measure. We’ve got five things to know about the country singer’s new bride.

Country star Dwight Yoakum, 63, and his longtime girlfriend Emily Joyce finally tied the knot in March of 2020 after 10 years as a couple. But they had a very pared down guest list thanks to the coronavirus outbreak limiting gatherings to 10 people or less. His team made the big announcement on May 4 via his Instagram page. Two beautiful photos showed the couple inside of a Santa Monica, CA church while in their full wedding attire.

“Dwight Yoakam and Emily Joyce were married in March just prior to the quarantine in a private ceremony at St Monica Catholic Church in Santa Monica, CA,” the caption began. “At a time when there is so much uncertainty in the world, there are still happy moments. In the face of shutdowns and social-distancing requirements, love prevailed, and the less than ten attendees were seated at least six feet from one another.” The thoughtful pair waited to share the nuptials news “out of respect to so many people affected by and on the front lines of this pandemic.” We’ve got five things to know about Emily.

1. Emily is a professional photographer. She owns her own photography business and has taken numerous pics of her beau that he’s shared on social media. She photographs all of the guests who come in the studio for Dwight’s SiriusXM channel Dwight Yoakam and the Bakersfield Beat, including Post Malone, Billy Bob Thornton and more.

2. Emily is not big into social media. While she has her own Instagram page @emily.joyce.photography that Dwight tags in all of the photos she takes, Emily hasn’t shared a single post, despite having 25.4 thousand followers. Of the 204 people she personally follows, Jessica Simpson, Jennifer Garner, Jennifer Aniston, Reese Witherspoon, Blake Lively, Nicole Kidman, Keith Urban and Garth Brooks are on her radar. Emily doesn’t have accounts on Facebook or Twitter.

3. Emily is patient. She’s been dating the “Guitars and Cadillacs” singer since 2010. The pair got engaged four years ago in 2016 and waited until 2020 to tie the knot.

4. Emily made for a beautiful bride. She could be seen in wedding photos wearing a stunning long satin gown. It featured a high neckline and included sheer cutout panels on the sides as well as sheer elbow-length sleeves. The dress featured a slight train and Emily wore a traditional white veil and carried a bouquet of white roses for her ceremony. You can see the pics here.

5. Emily followed in the footsteps of Gisele Bundchen with her wedding location. St Monica’s Catholic Church is where six-time Super Bowl champion quarterback Tom Brady, 42, and supermodel Gisele Bundchen, 39, married while surrounded by just close friends and family on February 26, 2009. Other celebs who have tied the knot there include Xena, Warrior Princess Lucy Lawless when she wed Robert G. Tapert at St. Monica’s in 1998.