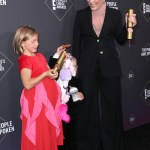 After Pink and Carey Hart’s 15th wedding anniversary, we’re taking a look back at their love story — from the couple’s wedding day, to the births of their 2 kids, to starring in sultry music videos and beyond!

Throughout their two decades together, Pink and Carey’s relationship has faced highs and lows, yet they continue to be a team like no other. Although their romance survived a tough separation, it also flourished through many milestone moments. In honor of Pink and Carey’s 15th wedding anniversary, we’re reliving their imperfectly perfect relationship in our very own timeline:

The then-budding singer and the bada** motocross racer met in 2001 at the Summer X Games in Philadelphia (Pink is a PA native), where Carey was a main fixture at the event. They pair instantly hit it off and began dating.

Later in 2001, Carey starred in Pink’s music video for her hit, “Just Like a Pill,” which only strengthened the then-new romance. “I was like, ‘Ahhhhh, I’m not really into that,’” Carey told The Daily Telegraph of the singer’s request to have him in her video. “She said ‘All right I have to put some other good-looking guy in there and I have to lick his belly.’ [I said] well, I guess I’m going to have to be in the video,” he joked. Although, they split in 2003 for a year, Pink and Carey eventually reconciled.

Leave it up to pink to get down on one knee! Pink proposed to Carey in 2005 when the motocross racer competed during the Pro 250 class finals in Mammoth, California. In a 2014 Supercross interview (seen above), Carey described Pink’s  spontaneous proposal, which included her writing “Will U Marry Me? Serious!” on a pit board during a race. “I said, ‘Well, yeah of course,’ and she said, ‘Well, get your ass back on the track. I don’t marry losers,'” he recalled.

Pink (born Alecia Beth Moore) and Carey tied the knot in Costa Rica on January 7, 2006. There are little to no details about the nuptials, but, it’s obvious that a lot of love was in the air!

2008 was a bleak year for the Pink and Carey, who took time apart from each other due to their grueling schedules. She shared the news on her website at the time, writing: “The most important thing for you all to know is that Carey and I love each other so so much. This breakup is not about cheating, anger, or fighting. I know it sounds like cliché bulls–t, but we are best friends, and we will continue to be.”

During the separation, Pink released her mega-hits “So What”, “Mean,” “I Don’t Believe You” and “Please Don’t Leave Me,” which were all inspired by her relationship with Carey. The tracks debuted on her Funhouse album that same year.

Pink discussed the couple’s separation in a 2013 interview. “We were working all the time; there was so much time between our visits,” she told Redbook. “Carey would see me for five days and be gone for six weeks. We’d try to fix everything in those five days — you just can’t do that.” While they were still estranged, Carey appeared in Pink’s video for her song “So What,” which includes the lyrics: “I guess I just lost my husband / I don’t know where he went / So I’m gonna drink my money / I’m not gonna pay his rent.” In a separate interview with UK’s Radio 1, Pink revealed that she convinced Carey to appear in the video before she told him what the song was about. He found out its meaning when he got to set.

By 2010, Pink and Carey were in a much better place. After two years apart, they reunited as a couple and Pink confirmed the news on social media. Though, she elaborated on what refueled their romance in the aforementioned Redbook interview. It turns out that the two were separated for just 11 months before Carey asked Pink to reunite in Las Vegas to ring in 2009.

“Eleven months after we broke up, he asked me to fly to Las Vegas to perform on New Year’s Eve at his club,” Pink said. “… [A]fter sound check I told him that he needed to come to my room. I had made him a photo album of all the cards he had ever given me, of all the photos of our entire relationship. I spent months on this album,” she admitted. “On the last page, I pasted a photo of me from a really bad movie I made years ago with my neck slit and blood everywhere. Next to it I wrote, ‘This is me without you.’ On the next page, there was a picture of a baby. And I wrote: ‘The rest is unwritten.’ The divorce papers that we never signed were behind that page. I was like, ‘The rest is up to you,'” Pink explained, adding, “And I did all of this in his favorite bra and panties.”

Pink is Pregnant for the First Time

She announced the good news during an appearance on The Ellen DeGeneres Show in November 2010. “I’m eating for two these days,” Pink revealed at the time.

Four years later, Pink gave birth to the couple’s second child together, son Jameson Moon, on December 26, 2016. The singer had just announced her second pregnancy in mid-November on Instagram with a photo of herself cradling her baby bump, while she posed with Willow.

In April 2020, when coronavirus had just started to spread throughout the U.S., Pink revealed on social media that she tested positive for COVID-19. “Two weeks ago my three-year old son, Jameson, and I are were showing symptoms of COVID-19. Fortunately, our primary care physician had access to tests and I tested positive,” she began in a lengthy Instagram post, shared on Friday, April 3.

“My family was already sheltering at home and we continued to do so for the last two weeks following the instruction of our doctor,” she explained alongside an adorable photo of the mother and son at a pumpkin patch. At the time, Pink continued to update her followers on the status of her and her son’s health, and maintained that her husband Carey and daughter Willow had remained healthy.

After her family’s bout with the virus, Pink announced that she was “donating $500,000 to the Temple University Hospital Emergency Fund in Philadelphia in honor of my mother, Judy Moore, who worked there for 18 years in the Cardiomyopathy and Heart Transplant Center,” as well as $500,000 to the City of Los Angeles Mayor’s Emergency COVID-19 Crisis Fund.

Pink Opens Up About the Couple’s Past with Marriage Counseling

During a candid conversation about mental health with Vanessa Inn, via Instagram Live in June, Pink admitted, “I got a lot of sh-t for telling people that Carey and I have been in couples counseling with Vanessa [Inn].” She explained, “So I talk to Vanessa on my own and I also talk to Vanessa with Carey and for Carey and I. It’s the only reason that we’re still together because you know, I think partners after a long time, we just speak — I can’t say it’s a man and woman thing, I think it’s a partner thing, a spouse thing — that you just speak two different languages.”

Pink continued, “You need someone to hear both of you and then translate it for you, and without Vanessa translating for me for the last 18 years, I mean we would not be together. We just wouldn’t because we are not taught as kids how to have relationships, how to get along with people.”

On January 7, 2021, Pink and Carey celebrated 15 years as a married couple. Both the singer and former pro motocross racer took to social media to acknowledge the relationship milestone.

“15 years w/ this amazing woman! Damn, baby!!!!! There is no other woman that I would want to go through this crazy world with than you,” Carey wrote alongside a video that showed his wife dancing on a boat with a red cup in her hand. “Thanks for being a great friend, wife, mother, and person. Throw your [middle finger] in the air,” he wrote in reference to his wife, who was waving her middle finger in the clip.

For her part, Pink shared a collage of photos to Instagram, that showed the couple and their two kids through the years. “15 years. Proud of us babe,” Pink wrote alongside her post. “See, sometimes being stubborn pays off. What a wild ride it’s been, once we learned how to stay in our race line. Here’s to at least the next 15 months hahahAh. I love you and I love our family.”