The 2021 Academy Awards are nearly here! Amidst the coronavirus pandemic, the show, which takes place on Sunday, April 25, is aiming to keep things as normal as possible for the stars this year. That means that we can definitely expect some incredible red carpet moments from the celebrities who are on-hand to present awards, accept awards and celebrate the amazing movies that came out during this extremely difficult year.

Over the years, the Oscars have provided a plethora of amazing red carpet looks, and we rounded up the best of the best. There’s no doubt that the Academy Awards are one of the most prestigious celebrity events of the year, but, in addition to the movies being recognized, there’s always a big focus on the fashion, too. Check out some of our favorite Oscar looks below and in the gallery above!

Who could ever forget the iconic look that Angelina Jolie wore to the Academy Awards at the Hollywood and Highland Center Theater in 2012?! The ensemble featured a sexy leg slit, which Angelina took up a notch by striking an absolute power pose to show it off on the red carpet. Angelina’s black, Atelier Versace gown had an uneven, strapless neckline, and she completed the look with a pair of peep-toe black heels. Not only did the actress look amazing, but her pose in the dress sparked memes that went viral for weeks after the event, which took place on Feb. 26, 2012, happened.

As it turns out, this dress almost wasn’t Angelina’s final pick for the red carpet that night. “I had a more complicated dress and I wore the more comfortable dress, which was that one,” Angelina admitted to Extra in 2019. “I think I was just so comfortable that…I think when you feel comfortable, you feel yourself.” Even all of these years later, Angelina is still remembered for the way she showed off her leg at the Oscars in 2012, and the look will for sure go down in history.

Brie Larson attended the 2020 Oscars as a presenter, and she was definitely one of the best dressed stars of the night. The actress showed up to the Feb. 9 red carpet at the Dolby Theatre in Hollywood wearing a gorgeous Celine dress, which was covered in intricate beading. The gown included a mixture of sequins, glass beads, pink jewels, and even Swarovski crystals. A plunging neckline and thigh-high leg slit allowed Brie to show some skin on the red carpet, while the cape sleeves added elegance to the look. Brie was absolutely radiant and glowing, with her hair pulled back into a sleek updo to complete the look.

Scarlett Johansson has worn a bunch of gorgeous red carpet looks at the Oscars over the years, but one of the most memorable was this emerald Versace dress, which she wore in 2015. The dress was super simple, with a plunging neckline and no bells and whistles. However, it complemented Scarlett’s figure perfectly, and she added major flair by pairing it with a chunky necklace, which matched the color of her gown. Scarlett had short hair at the time, and she wore it slicked back for a fierce addition to the ensemble.

While attending her very first Oscars in 2019, Gemma Chan absolutely dazzled in a pink Valentino gown. The parachute style dress featured a long train, which definitely stood out. Gemma’s look had ruffled detailing throughout, including an intricate ruffle design around her neck. She completed the outfit with her hair pulled back into an updo, and was the picture of perfection.

Charlize Theron totally gave Angelina a run for her money with this look at the 2020 Academy Awards! Her black Dior gown also featured a sexy leg slit, which Charlize made a point to show off as she posed for photos. The top of the dress was uniquely designed, featuring one regular sleeve, and one that drooped down to her elbow. There was also a long, flowing train, which looked stunning in Charlize’s red carpet pics. Her look was complete with a diamond necklace and her hair pulled back, which definitely allowed the dress to do all the talking. This dress was the perfect amount of sexy for the Oscars, which is why it’s certainly one to be remembered.

Janelle Monae added some sparkle and flair to the Oscars red carpet at the Dolby Theatre in 2020. She rocked a glittering Ralph Lauren dress, which featured a unique addition with a hood. The dress was covered in more than 150,000 Swarovski crystals, which were literally glittering as Janelle posed for photos. While the dress covered up the entire front of the singer’s body, including her arms, there was a cutout in the back to show some skin. The gown also cinched at Janelle’s waist before poofing out at the bottom, so her body wasn’t overtaken by the dramatic skirt. A hood is definitely not common at the Oscars, but Janelle made it elegant and high-fashion, which is why she definitely makes our best dressed list!

Florence Pugh was a first-time honoree at the 2020 Oscars, where she received a nomination for Best Supporting Actress for her role as Amy March in Little Women. Although Florence lost the award to Laura Dern, she definitely looked like a winner when she showed up to the Dolby Theatre’s red carpet in her gorgeous look. Florence wore a teal Louis Vuitton dress, which featured a ruffled pattern and low-cut neckline. The gown was belted across the middle, and had a hi-lo hemline at the bottom. This allowed Florence to put her sky-high, strappy, teal shoes on full display as she posed for pictures. Her look was complete with an intricate silver necklace, along with her hair pulled on top of her head in a unique updo.

At the 2011 Oscars, which took place on Feb. 27 at the Kodak Theatre in Hollywood, Mila Kunis was an absolute standout in her intricate purple gown. The dress was from the Elie Saab Haute Couture Spring 2011 Collection, and featured intricate lace detailing throughout. The neckline dipped low to add some sexiness to an otherwise very classy and elegant look. Mila looked angelic with her hair pulled back into an updo, with her bangs dipping to one side of her forehead. Although Mila was only at the show as a presenter, she undoubtedly stood out in this look, which is definitely one to remember.

Jennifer Lawrence is definitely no stranger to the Oscars. The actress has won an Academy Award and been nominated several times, which means we’ve seen her on plenty of Oscars red carpets. Although Jen always looks fabulous, her most memorable Oscars look was at the 2016 show, which took place on Feb. 28 at the Dolby Theatre. Jennifer wore a Dior look that was absolutely breathtaking! The dress was nude-colored on top, with an intricate floral design stitched in black across the chest. This led into a sheer, lacy, black skirt. Jennifer accessorized with layered pearl necklaces, and wore her hair simple and straight, with a part down the middle. We’ve seen Jennifer wear so many Dior looks over the years due to her partnership with the iconic fashion brand, but this was definitely one of our favorites. 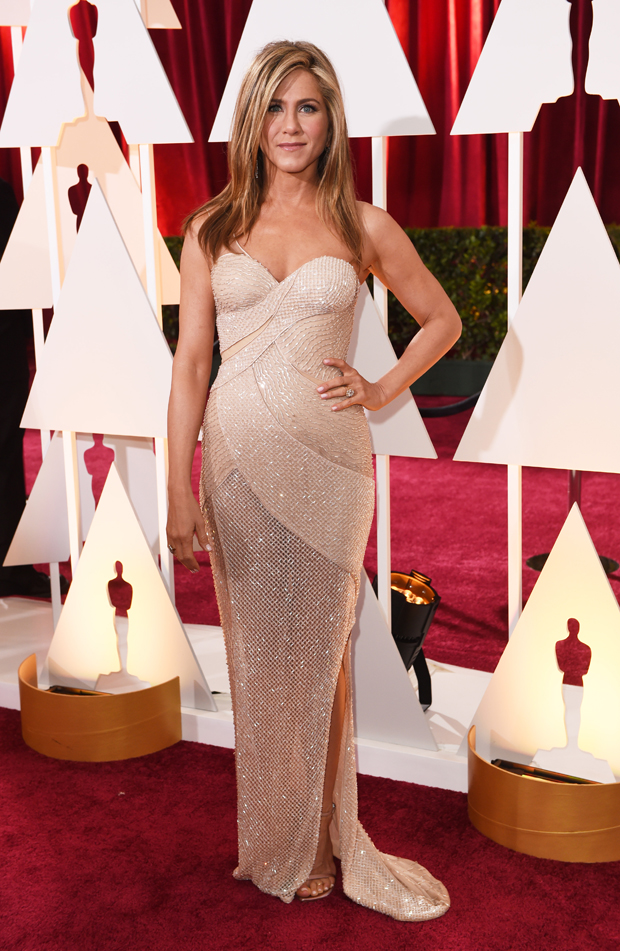 At the 2015 Oscars, which took place at the Dolby Theatre on Feb. 22, presenter Jennifer Aniston stole the show in her red carpet look. Her strapless, nude-colored Versace gown featured intricate beading, along with a knee-high leg slit on one side. The dress hugged every inch of Jen’s figure perfectly, and she was the perfect combination of sexy and sophisticated in the look. As always, Jennifer kept her hair styled simply, with straight locks and a messy side part to add some volume. Her open-toed heels were also visible through the bottom of the gown. Jennifer has attended the Oscars a number of times over the years, but this is definitely our favorite look from her!

There are plenty of more amazing Academy Awards dresses where these came from. For more of the best Oscars dresses of all-time, check out the gallery above! The 2021 Academy Awards will take place at the Dolby Theatre and Union Station in Los Angeles on Sunday, April 25. The show airs on ABC at 8:00 p.m. Awards season may be over, but at least we have plenty of amazing fashion to look back on!