Charlize Theron was a whole production on the red carpet at the 92nd Academy Awards in LA on Sunday night. The Bombshell actress, 44, turned heads in tight black Dior Couture gown. The one-shoulder dress featured a peplum center, a sultry slit and a long wavy train.

The actress stepped out in a pair of black open-toe heels. Charlize kept her jewelry minimal, but made a statement with her silver diamond necklace by Tiffany & Co from its Fall 2020 collection. The necklace featured a mesmerizing D color Internally Flawless marquise diamond of over 21 carats and 165 Tiffany diamonds in total. She also wore Tiffany diamond studs and band rings. Charlize donned a straight pixie cut with a dramatic side part. — A completely different hairstyle than her dark bob in 2019.

Charlize posed for solo photos on the red carpet, but she wasn’t alone. The actress brought her mom as her date to the Oscars, and she looked beautiful in a sparkling green dress. Charlize’s mom gushed over daughter during a red carpet interview. 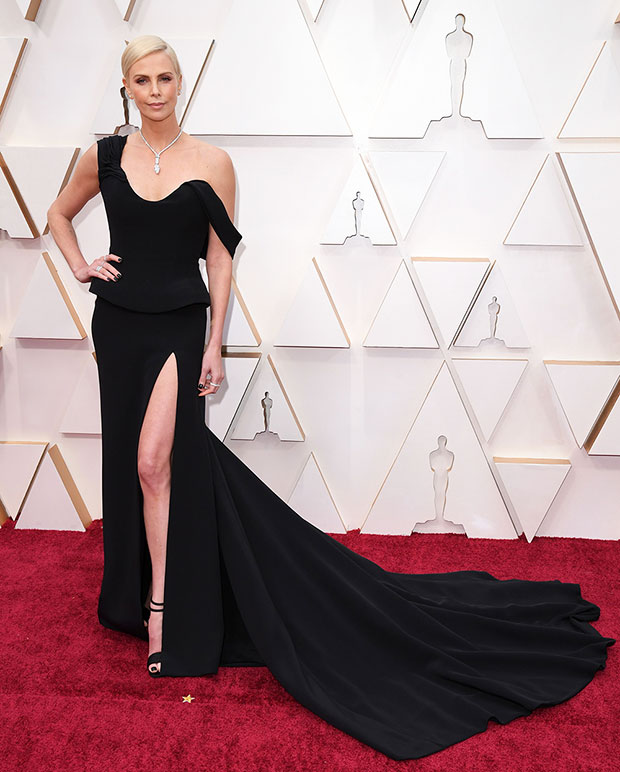 Charlize Theron on the red carpet at the 2020 Oscars in Los Angeles, CA on February 9. (Photo credit: David Fisher/Shutterstock)

The Oscars for Charlize, a veteran actress in Hollywood, is a night she doesn’t take for granted.

“It’s always interesting when you reflect on a night like this,” she said of the awards show. Charlize then reflected on her time working on Bombshell. She thanked Mathew Jay Roach, the film’s director.