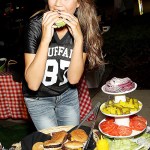 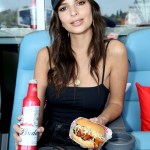 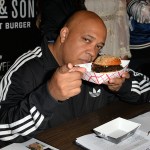 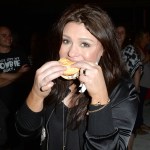 Today, Sept. 18, is National Cheeseburger Day! To celebrate this mouthwatering holiday, we rounded up photos of all your favorite celebs digging into juicy burgers. Check them out!

“Eat clean to stay fit. Eat a burger to stay sane.” That’s the motto Gigi Hadid lives by “religiously” and it’s a pretty great one to have on National Cheeseburger Day. The delicious holiday takes place today, Sept. 18, and in  celebration, we’re inviting you to dig into some photos of celebrities chowing down on the iconic sandwich.

We’d definitely assume that Gigi would be a big fan of the holiday since she’s a proud lover of burgers. Her life motto was revealed on The Tonight Show in 2016 when Jimmy Fallon wanted to find a way to honor her belated 21st birthday on the show. But before unveiling a plate of mouthwatering cheeseburgers, Gigi opened up about her quest to find the perfect burger in NYC.

“My best friend and I moved to New York… and we decided we were going to try a new burger every week and find the best burger,” she told the late night host. “So for my first year in New York, that’s what I did.” When Jimmy asked her if she ever found that perfect burger, she named JG Melon, a pub in the Upper East Side.

“The thing about J.G. Melon’s is they’re super simple. They just don’t try too hard and it’s so good,” she gushed as she analyzed the plate of burgers Jimmy brought out. She confessed that she skips the tomatoes before chowing down.

Gigi isn’t the only celeb who loves herself a good burger – and JG Melon isn’t the only place that stars get their fix. A west coast favorite is obviously In-N-Out, but even Heidi Klum wouldn’t turn her nose up at a classic Big Mac. Chrissy Teigen has her own series of cookbooks and regularly shows fans her cooking process on social media. In 2017, she took to Snapchat to show her followers an epic burger bun hack. She took a regular burger bun cut in half, spread it with butter, sprinkled unsweetened coconut flakes on top and then popped it in the oven to toast it.

Start clicking through the gallery above to see more celebs like Kendall Jenner, Taylor Swift and Priyanka Chopra digging into burgers! Unfortunately we can’t offer you a side of fries with it, though.