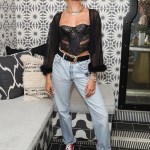 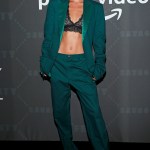 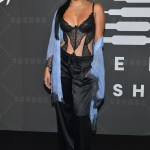 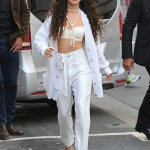 When done tastefully, lingerie can totally double as clothing! Stars like Hailey Baldwin, Kourtney Kardashian and more have proven that underclothes don’t ONLY have to be worn under clothes.

Lingerie is not cheap, so why should we hide it underneath our clothes?! Over the years, tons of celebrities have stepped out in looks that prove that it’s perfectly acceptable to wear lingerie as outerwear, and they all look incredible while doing it. One example is Hailey Baldwin, who attended the Levi’s brunch at the Coachella Valley Music & Arts Festival in a vintage Dior corset. The tight, lacy top was paired with a pair of light-wash jeans, and allowed Hailey to rock a sexy, yet casual, look for the outdoor event. She looked super cool AND sexy in the outfit, which she paired with sunglasses, a belt ,and plenty of jewelry.

In June 2019, Kourtney Kardashian also rocked the ‘lingerie as clothing’ trend when she stepped out in a purple-hued slip dress, which featured black lace around the edges. Although the outfit looked like any regular mini dress, it had an extra layer of sexiness to it because of the lace and silky fabric, and Kourt totally pulled it off. Plus, by pairing the dress with strappy, black heels, she was able to dress it up and make sure that it didn’t look like nightwear.

Kourt’s sister, Kim Kardashian, has also taken on this lingerie trend. Back in Sept. 2016, she hit the streets of New York City in a sheer blue bra as a top. She covered up with an oversized denim jacket, but the bra was still on full display. Kim completed her look with jean shorts and clear thigh-high boots, and she definitely made a style statement with the ensemble.

These aren’t the only ladies to attempt this trend, though! Click through the gallery above to check out more stars slaying in lingerie-inspired clothing!