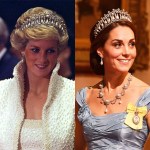 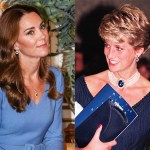 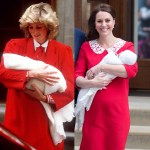 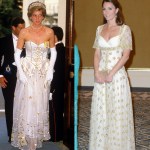 Kate Middleton and Meghan Markle are always subtly paying homage to the late Princess Diana with their fashion choices! Take a look back at their timeless styles on Princess Diana’s birthday!

It’s Princess Diana’s birthday, and on what would have been the celebration of 59th year of life, we’re looking back at how her lasting influence has gone on to affect her two daughters-in-law. While Meghan Markle has taken a step back from royal life, Kate Middleton has been at it a long time, and has mastered the art of recreating Princess Diana‘s iconic styles. Meghan has also given her own twist to the late princess’s gorgeous fashions, but Kate has paid homage to Di at every birth and christening of her children and beyond. When Kate Middleton gave birth to Prince George in 2013, she wore a polka-dotted light blue dress upon introducing the future King of England to the public.

Her dress closely mimicked Diana’s polka-dot frock she wore after Prince William’s birth in 1982. Then, for the most recent birth of Kate’s second son, Prince Louis, the Duchess of Cambridge greeted the public wearing a red dress with a white collar, just as Princess Diana did for Prince Harry‘s baby reveal in 1984.

The Princess of Wales also iconically fashioned a gold and white gown at the banquet at the German Ambassador’s residence in London in 1986, and Kate similarly wowed in a custom Alexander McQueen gown while attending a 2012 dinner in Malaysia during the Diamond Jubilee Tour. Kate also has the same affinity for fascinators as Diana did, matching them to several of her looks!

Kate donned a hot pink power suit with a matching hat at the Trooping of the Colour ceremony in 2017, as Diana did to a garden party in Buckingham Palace in 1983. Then, again, Kate wore a white coat with a blush hat and large flower to the Queen’s 90th birthday parade, similar to Diana’s white jacket and printed skirt that she matched with a large white sun hat at the Royal Ascot in 1987.

Prior to taking a step back from royal duties with her husband, The Duchess of Sussex donned an Oscar de la Renta dress to her first Royal wedding (other than her own), and the periwinkle printed gown was almost identical to Princess Diana’s light purple tunic she wore while visiting Saudi Arabia in November 1986.

Then, of course, for the reception following Prince Harry and Meghan’s wedding, Meghan wore a stunning aquamarine ring that once belonged to Princess Di. Finally, Meghan’s black and white outfit for her first Royal Ascot was very reminiscent of Diana’s black and white suit she donned to the Melbourne Cup in 1985.

We always love seeing the wives of Prince William and Prince Harry pay tribute to their late mother-in-law, Princess Diana, and they do it with such class! Be sure to go through the gallery above to see all of the times Meghan and Kate have dressed like Diana!