Flavor Flav, 61, has been a hot commodity for the ladies over the years. So much so, that the rapper and Public Enemy member (née William Jonathan Drayton Jr.) had his own dating game show, Flavor of Love, that aired on VH1 in the mid-2000s. Flav has dated many women, four of whom he’s had a total of 8 children with. A few of Flav’s exes are also famous, as well. Below, everything you need to know about the women who have been romantically involved with the one and only Flavor Flav.

Flav dated Karen Ross in the late ’80s and early ’90s. With Karen, Flav welcomed three children: Shanique, Karren, and Karla. In 1991, Flav plead guilty to assaulting Karen and subsequently spent 30 days in jail. He also lost custody of his children. Following the incident, Flav’s family staged an intervention after domestic violence and numerous drug charges were filed against him. Since then, Flav had various child support issues, often refusing to pay. However, he has posted some photos on social media of his kids that he shares with Karen. 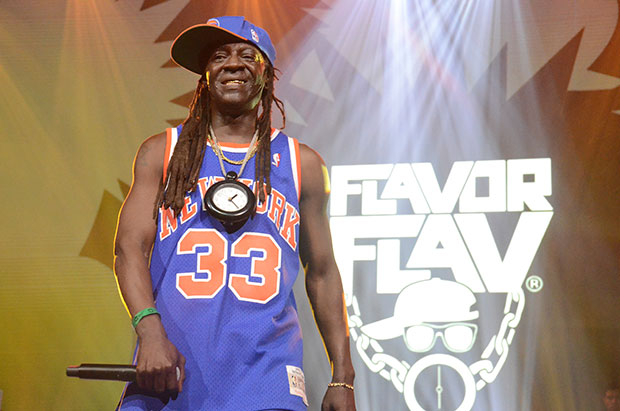 Flav became romantically involved with Angie Parker in the 90s. Together, they had three kids: Da’Zyna Drayton, Quanah Drayton, and William Drayton. They all appeared on the first season of Growing Up Hip Hop: New York with their dad. Flav ended up getting back into drugs and legal troubles, which seemingly led to his split from Angie.

In 2000, following two stints in rehab, Flav was living in the Bronx with his next girlfriend, model Beverly Johnson, and her two children. They kept dating when Flav went to jail at Rikers Island in 2002 for nine weeks for driving with a suspended license and numerous parking tickets. After he got out of jail, Flav broke up with Beverly and moved in with his mother, Anna Drayton, on Long Island (Anna later died in 2013).

Actress Brigitte Nielsen, 58, was Flav’s first girlfriend during his tenure on reality television. The pair met on season 3 of VH1’s The Surreal Life, which aired in 2004. They got their own spinoff series, Strange Love, which focused on Flav and Brigitte’s relationship. At the end of the series, Brigitte decided to break things off with Flav and rekindle her romance with her fiancé, Mattia Dessi. Brigitte married Mattia in 2006, and they welcomed a daughter in June 2018 when Brigitte was 54. Later that month, Flav told PEOPLE, “All I want to see is her happy and everything she wants in life. All she wants in life is a happy life and good family life. She’s good to people. That’s why we clicked. Birds of a feather will flock together.” The rapper added of Brigitte, “I miss my friend. I miss being around her.”

Flav briefly dated Nicole Alexander, 38, the winner of Flavor of Love season 1. The series was similar to The Bachelor, in that Flav would choose from a group of women who were vying for his affection while living together in one mansion. The series became a huge hit for VH1, but Flav and Nicole’s relationship didn’t last for long. They did, however, stay friends after they split romantically.

Related: Steve Lacy: 5 Things To Know About The Grammy-Nominated Artist

London ‘Deelishis’ Charles was the winner of season 2 of Flavor of Love. Like the situation with Nicole, London did not date Flav for very long after the show wrapped. London has since developed a massive social media following with over 3 million Instagram followers.

Flav was romantically involved with Tiffany Pollard, 39, on two seasons of Flavor of Love. Tiffany was the runner-up of season 1, and then returned for season 2 and came in 2nd place once again. Flav and Tiffany were on-and-off after the series, but the relationship didn’t go the distance. Tiffany went on to get her own spinoff series, I Love New York. She’s also appeared on Celebrity Big Brother (U.K.) and more reality shows.

On the season 3 reunion of Flavor of Love, Flav proposed to Elizabeth Trujillo. Flav and Liz are still married today but have had many ups and downs, as Liz announced on a 2013 episode of Couples Therapy that she wasn’t aware of Flav signing his dating show contracts for Flavor of Love Seasons 1 and 2. They welcomed their son Karma in 2007, and Flav has shared many sweet photos of he and his son to social media.

In 2019, Flav was romantically involved with former assistant Kate Gammell. Kate ended up giving birth to Flav’s eighth child, son Jordan. She filed a paternity suit in 2019 in the Los Angeles County courts and it was confirmed Flav is the father of the child. “Jordan is not getting any child support from Flavor, and I needed money for Jordan’s everyday needs,” Kate shared in an interview with HipHopDx in 2019. “So, I decided to pull out the merch and sell it to help my son and give a percentage to Children’s Hospital.”