Going, going blonde! The biggest stars in Hollywood are proving you don’t have to be a natural blonde to rock the head-turning color. Stars like Zac Efron, 31, Zayn Malik, 26, and Pete Davidson, 25, may have been born with brunette hair, but after bleaching their hair to a bright blonde hue, well, they looked better than ever! These stars bravely took the plunge to platinum perfection, and it really is brighter on the other side. Between shocking red carpet appearances, and sexy social media unveils, we’re looking at all of the hottest celebs who have debuted bleach blonde ‘dos.

Zac Efron is no stranger to undergoing radical transformations for a role. The once High School Musical star beefed up for eye-catching appearances in Dirty Grandpa, Neighbors and Baywatch. However, HSM fans might be shocked to see him portray Flicker in The Beach Bum, the 2019 film from Harmony Korine. The filmmaker, who put Selena Gomez in 2012’s Spring Breakers, cast Zac as a “drug rehabilitation patient” with an outlandish hairstyle. It seems the movie had quite an influence on Zac, as he rocked a brightly blonde makeover at the movie’s LA premiere on March 28, 2019.

We had to do a double take when Zac took to Instagram on Jan. 9 to show off his rock climbing skills. As if his athletic abilities weren’t impressive enough, the actor also showed off a brand new bleach blonde hair ‘do that had fans going wild. After seeing the hunky High School Musical star’s new locks, fans fawned over Zac in the comments. “Loving the new look!” one wrote below the pic.

Ansel Elgort is another one of the latest stars to lighten his hair to platinum blonde. The actor showed off his new bleach blonde hair makeover and a toned body on Jan. 20, when he flaunted some major PDA with girlfriend, Violetta Komyshan on a beach in Mexico. His beach look was a far cry from his usual super dark locks! 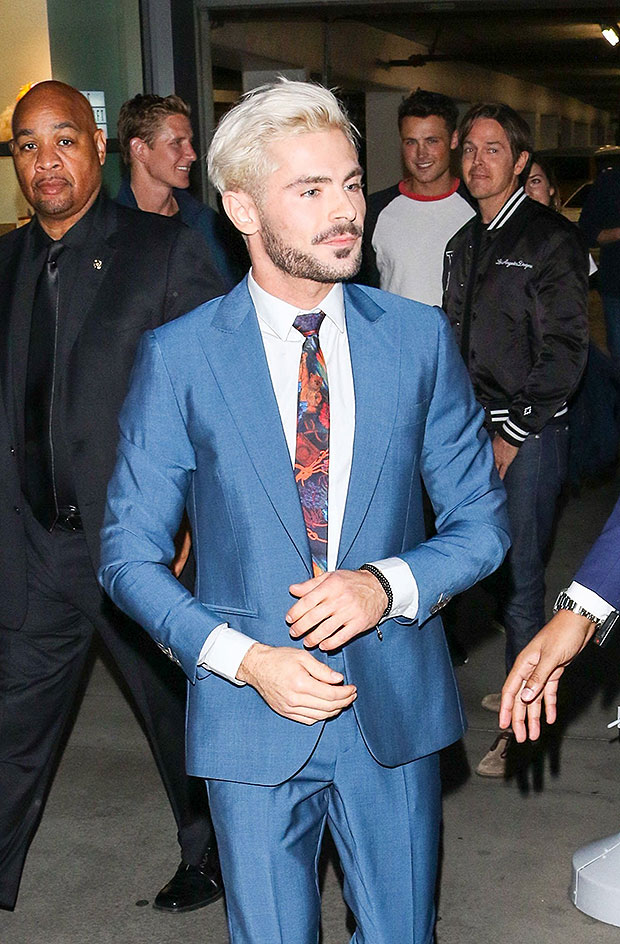 Musicians like G-Eazy, and former One Direction member Zayn have played the part of a blonde bombshell. G-Eazy stepped onto the 2018 ESPYs red carpet and flaunted bleached hair back in July. He looked dapper in an olive green suit that night, but it was his hair makeover that took center stage! Zayn went blonde all around when he dyed his hair AND beard bleach blonde in March of 2018. See all the hotties who have undergone a blonde makeover in the gallery above!