When 90 Day Fiancé premiered in Jan. 2014, the TLC show gave long distance shots at love a whole new meaning. The couples involved a United States citizen and a love interest from abroad, and the pair had 90 days to decide if their whirlwind courtship should end in a wedding — and thus a chance for the foreign citizen to stay in the U.S. on a K-1 visa — or break up with the one party returning to their country of origin. Sometimes the couples met during trips or work abroad, while others initially fell for each other online.

Or course during that three months period couples would have to adapt to cultural and language barriers, and often questions from concerned relatives over the quickie process of marrying a near-stranger. Some feel in love and are still together to this day with families of their own, while others tried to make things work, marrying then calling it quits on their adventure in international romance. We’ve got 10 couples, five who married and started families, while the other five tied the knot, only to have it end in sometimes very messy divorces.

Five couples who are happily married

Season one stars Russ and Paola Mayfield remain one of the show’s most beloved couples. Oklahoma native Russ met Paola while working at a petroleum position in her native Colombia, She obtained her K-1 visa and the pair moved to Oklahoma together, where they wed. Eventually Paola moved to Miami to try her hand at modeling after Russ lost his job in OK. He later joined his wife in South Florida.

After the pair settled in Miami, they suffered a tragic miscarriage while trying to start a family. Fortunately, they were able to have a rainbow baby, as Russ and Paola announced in 2018 that they were expecting again. Paola gave birth to son Axel on January 1, 2019. She’s become a successful fitness influencer with over a million Instagram followers.

The season two couple met at the 2013 World Games in Santiago de Cali, Colombia while waiting in line at a food stand. “I saw a beautiful girl standing in line, so I used my Spanish to say ‘Hola,‘ and she kind of laughed and smiled,” Justin shared on the show about their first brush with each other. “There was an instant spark, for the next seven days I don’t think she left my side one time. Three months later, I ended up going back to Colombia to see if this romance was real and by the end of that trip, I ended up proposing to her,” he added.

Evelyn moved to the U.S. with Justin on the K-1 visa, and the two married within 90 days of her arrival. She initially had to win over his family, who had doubts about her motives (though she is now quite close with them). The pair has been happily married for six years and just welcomed their first child— a son Nathan — September 1, 2020. They reside in San Jose, California. 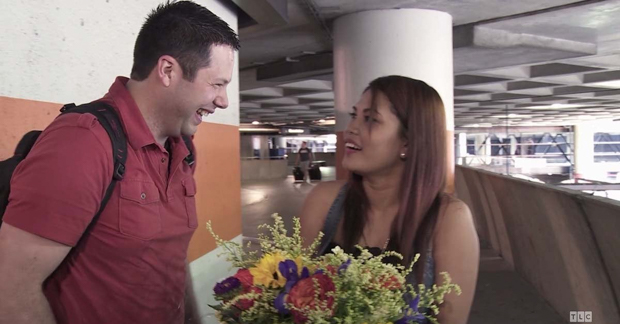 Washington native Brett was a 31-year-old divorcee in 2014 who decided to try to find love via an international dating website. He found Filipina beauty Daya, who moved to the U.S. to be with him. But it didn’t go over so well his his mom, who worried Daya was a gold digger who only wanted to marry Brett to obtain a green card. The couple wed in 2015, though Brett’s mom refused to attend the ceremony.

Brett already had a daughter Cassidy from a previous marriage. He and Daya had a child of their own when she gave birth to daughter Isabella in July 2017. The season two pair lives as a blended family and are still happily married to this day.

Season two’s Danny and Amy are still going strong with their own family of five. The pair met and fell in love when a then-21-year-old Danny was on a Bible study trip in Australia and met the then-19-year-old South African beauty. Danny knew he’d found “The One” and proposed at the end of the trip. Amy got her K-1 visa and moved home with Danny to his small Pennsylvania town. They married within 90 days, despite Amy living with Danny’s brother during that time, so that the couple could remain abstinent until their wedding night.

Despite Danny’s father’s objection to their union, the couple has made it work. They moved to Fort Worth, Texas and had two children, son Jed and daughter Anna. On Jan. 19, 2021, Amy announced via Instagram that they’d welcomed baby number three. “Yesterday at 3:45am we welcomed baby girl Willow to the world!! 6 lbs & 10 oz of pure love!” she wrote next to a photo of the infant.

Season six’s Kalani look a 2016 vacation from her native Orange County, CA to Samoa, where she met Asuelu, as he was working at the resort she was staying at. The pair stayed in touch and she made a subsequent trip back. During the 2017 visit, Kalani lost her virginity to the handsome Samoan, and became pregnant.

The couple welcomed son Oliver in January 2018. Asuelu applied for his K-1 visa so he could move to be with his partner and their son in her native California. They couple wed in Sept. 2018 and had a second son Kennedy in 2019.  They sweetly celebrated their second wedding anniversary last fall. The pair has their own popular YouTube channel with over 71K followers, where they share everything from their family life to Samoan cooking lessons, and are also active on social media.

Five couples who are divorced or broken up 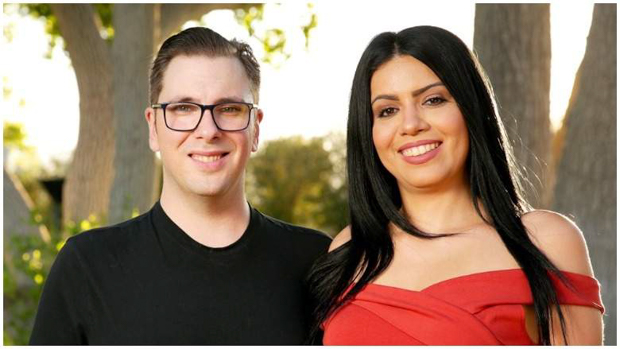 So messy! Las Vegas resident Colt  — a then-33-year-old who lived with his mom Debra most of his life — got engaged a mere five days after the and Larissa met in person in Cancun Mexico for the first time, after he struck up an online relationship with the Brazilian beauty. The pair went on to wed in June 2018. Larissa made it clear she wanted her husband to distance himself from his mom, which caused tons of friction with her new mother-in-law.

The season six pair’s relationship was completely toxic. It was marred by fights — one in which Larissa flushed her wedding ring down the toilet. Larissa was arrested for domestic battery on several occasions. Colt filed for divorce from Larissa in Jan. 2019, with his mom paying for the court paperwork. Just weeks earlier, he tried to get Larissa’s green card cancelled. “It’s something I knew that he will do. But if he feels happy with his choices then it’s up to him, but I am not surprised that he is doing it,” Larissa told HollywoodLife.com in an EXCLUSIVE interview. Larissa still lives in Las Vegas and has a thriving OnlyFans career. 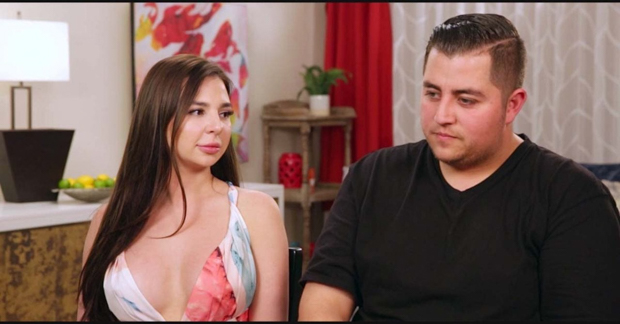 Jorge Nava & Anfisa Arkhipchenko‘s rollercoaster relationship was one of the highlights of 90 Day Fiance‘s season four. The Riverside, CA resident met the Russian via Facebook. His family and friends warned Jorge about her motives and her desire just to get a green card — especially when he couldn’t afford buy her her dream $10K handbag she coveted. But they tied knot anyway.

The couple had a turbulent marriage filled with fights, and eventually Jorge landed up in jail for marijuana possession in 2018. He served a two and a half year sentence and went on to claim that Anfisa cheated on him when he was in prison, and planned to divorce her when he was released.  He made good on his promise, filing for divorce on Aug. 7, 2020. Jorge dropped a ton of weight when he was behind bars and came out looking great! After his release, Jorge went on to start a fashion brand Kilos to Paris in July 2020. One of the label’s sayings is “Love Is Cursed. Focus On Fitness.” 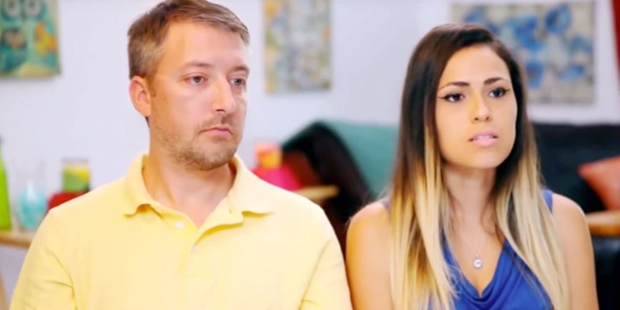 Season two couple Jason Hitch and Brazilian beauty Cassia Tavares met via Facebook while she was long-distance dating one of his pals he went to basic training with. When that relationship ended, “We struck up a conversation online and it wasn’t until six, seven, eight months where she said that she’s not involved with him anymore and she approached me about a relationship,” he said in a show confessional. Cassia moved to the U.S. and the pair tying the knot in Sept. 2014, with her K-1 process documented on 90 Day Fiance.

Jason was arrested for domestic battery in early 2017 after allegedly pushing Cassia to the ground, and it seemed to precipitate the downfall of their relationship, as they then separated. The Illinois native later filed for divorce in January 2018. However, the pair tried one last go before Jason filed again in Sept. of that year. “I tried everything last year to save whatever we thought we had,” he told Starcasm in Feb. 2018 about how he tried to save their union. “She flipped a switch and that was it. There was nothing I could do.” Cassia told the site that her ex was a “a good man sometimes,” but that, “I found him to be violent with his words, a controller and (as many of you know) an abuser.” 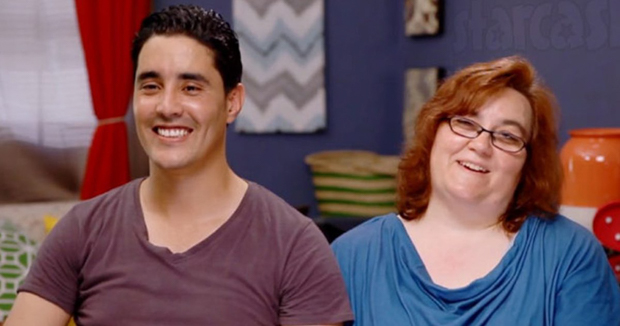 This season two couple sure brought the drama. The age gap between the Norwalk, OH woman and the Tunisian native was 15 years, with him being only 26 at the time of the show. The pair met in an online chatroom, and Mohammed moved to Ohio where they began their rocky romance. Danielle had 3 teenage daughters and 1 adult son from previous relationships, and despite the fact that Mohammed refused to be intimate with Danielle, they died the knot anyway within 90 days.

Shortly after their wedding, Danielle discovered Mohammed had allegedly been having online relationships with other women. He left Mullins two months after getting his green card, and she was so pissed that she tried to get the marriage annulled on the basis of his online flirtations with other women. “I want to get him deported,” she said on an episode of 90 Day Fiance: Happily Ever After? , noting, “I’m finally going to get some payback.” The former couple’s divorce was finalized in 2017. 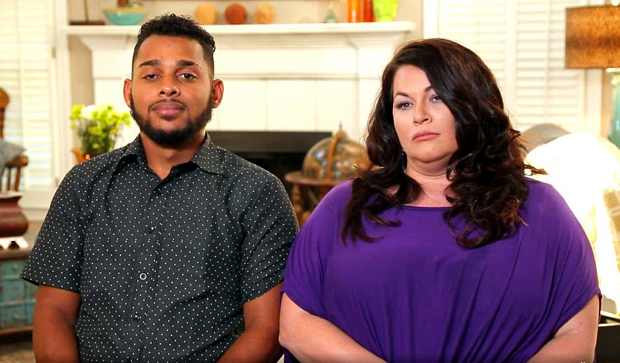 Molly was 41 was on vacation in the Dominican Republic when she met then 26-year-old Luis while he was working at a bar at her resort. While the season five couple did legally marry during the 90-day visa period, there was no blissful, family filled wedding. Molly’s two daughters did not approve of Luis, and neither did the woman’s father.

Luis wasn’t interested in being a stepdad to Molly’s kids, and got bored with life in Woodstock, Georgia with his much older wife. After six months of marriage, Molly filed for divorce in Jan. 2018. Five months after that was finalized in May, Luis moved on with his life by marrying a New Jersey woman in Sept, 2018. He has decided to keep her identity private, but told In Touch at the time, “Yes, I did get married. I love this girl so much. She is so amazing,” adding, The most amazing part was meeting her because she changed all life to happiness.