Kanye “Ye” West doubled-down on his drama surrounding Pete Davidson, dropping a second “Eazy” music video. While the first showed a claymation version of Pete, 28, getting buried up to his head, the version Ye, 44, released on Wednesday (Mar. 9), was a CGI affair. In the new video – WARNING: graphic imagery – the skinless monkey from the single’s cover art joins Ye and The Game on an adventure involving the song’s imagery. At 02:35, right at Ye’s lyric about Pete (“God saved me from that crash / Just so I can beat Pete Davidson’s ass”), a figure with a blurred-out face and a “SKETE” sweatshirt wanders in.

Despite the obfuscated image, it’s clear that this is a Pete stand-in (especially since “Skete” is Ye’s obscene nickname for Kim Kardashian‘s new boyfriend.) The skinless ape spots this “Skete” and kicks him to the ground. From there, the animal pounces on “Skete’s” body and then goes to town. That’s the last reference to “Skete” in the new video. In the first “Eazy” visualizer, Ye included a post-script. “Everyone lived happily ever after. Except You Know Who. JK He’s Fine.” 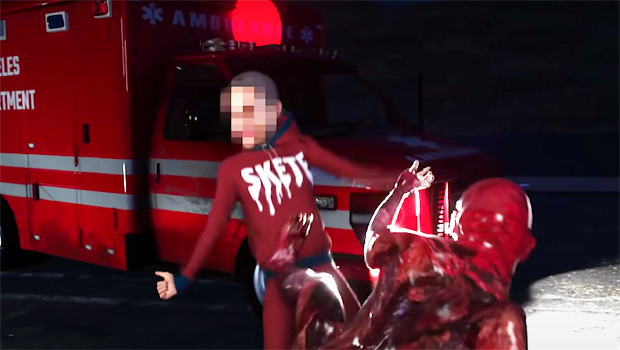 Ye’s original video received some harsh criticism from fans. While depicting the death of famous figures is nothing new to artistic work. For example, DJ Muggs and MF Doom‘s 2018 video “Assassination Day” showed Kanye getting fatally shot while on the 2020 presidential trail. However, after Ye’s ongoing real-world social media barrage against Kim, 41, and Pete, many fans thought this video seemed less like art and more like a veiled threat.

Ye defended his work in a now-deleted statement. “Art is therapy just like this view,” he wrote. “Art is protected as freedom of speech. Art inspires and simplifies the world. Art is not a proxy for any ill or harm. Any suggestion otherwise about my art is false and mal intended.”

Kim and the entire Kardashian clan were “absolutely disgusted” by Ye’s first video, a source told HollywoodLife EXCLUSIVELY. The video “reaffirmed to the world why Kim left him and why she is better off without that dark cloud hanging over her,” per an insider. However, Pete’s reaction to it wasn’t as harsh. The Saturday Night Live star “thought it was hilarious,” a source EXCLUSIVELY told HollywoodLife. Pete wasn’t bothered by the graphic and thought that “it’s a dope video,” per the insider.