A woman, who has only been identified as Jane Doe, is suing Snoop Dogg and his longtime friend, Bishop Don Juan, of sexual assault and battery, according to a court documents obtained by HollywoodLife. The woman, who claims she used to work as a stage dancer for Snoop and Don Juan, claims that the incident in her lawsuit took place in 2013. She filed a complaint on Feb. 9, 2022, just four days before Snoop was set to take the big stage at the Super Bowl. HollywoodLife has reached out to Don Juan and Snoop Dogg’s rep for comment and has not heard back as of press time. 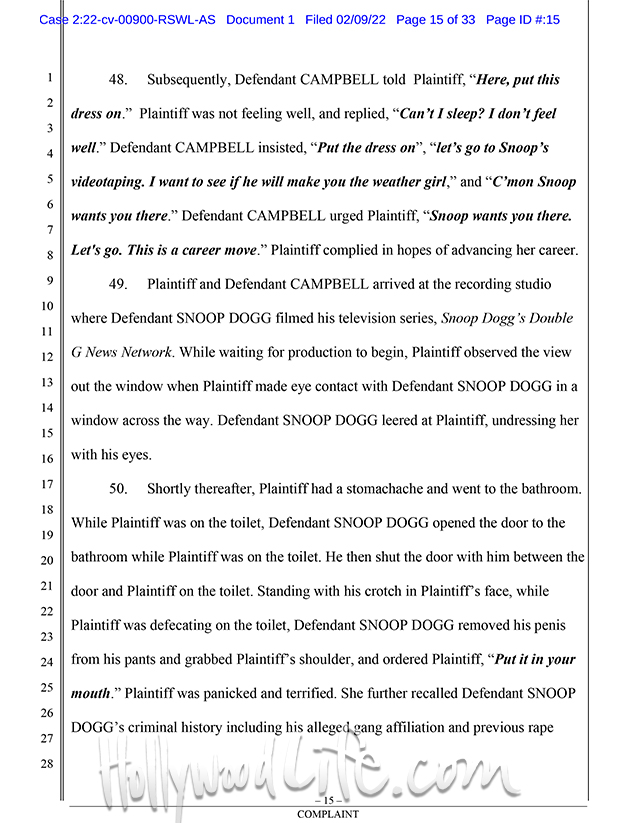 In the lawsuit, Jane Doe says that she and a friend went to one of Snoop Dogg’s concerts in May 2013, and were hanging out in the VIP area with Don Juan. She claims that Don Juan invited her and her friend back to Snoop’s studio and they agreed. After Jane Doe’s friend left, Don Juan allegedly told Jane Doe, “I can take you home or I can take you back to my place with me,” according to the lawsuit. Jane Does alleges she asked to go home, but that she woke up at Don Juan’s home after falling asleep in the car. 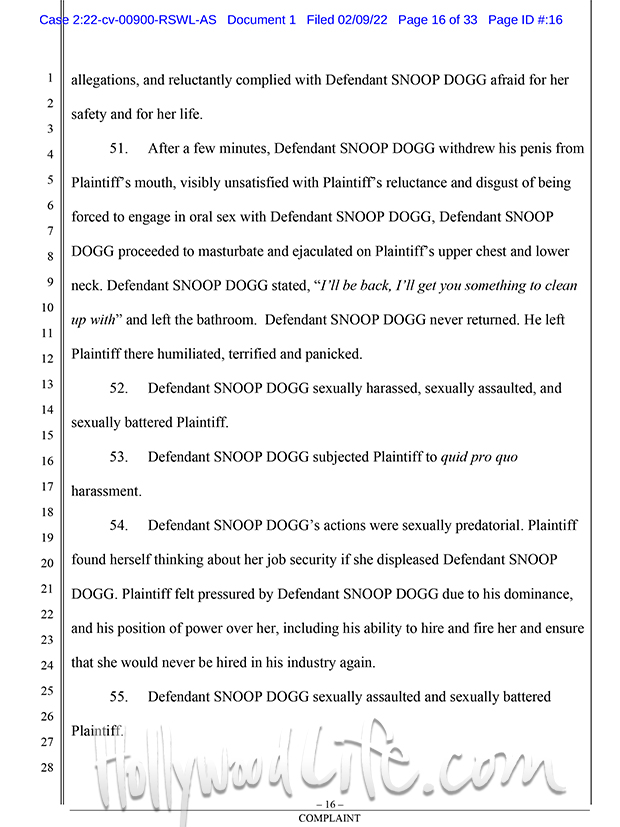 Jane Doe alleges after falling asleep at Don Juan’s house, she woke up around 4:00 in the morning to Don Juan “removed his penis from his pants and [forced] his penis in [her] face.” She claims that Don Juan discriminated against her and harassed her on the basis of her sex and gender, then allegedly forced her to go with him to see Snoop, who allegedly “wanted [her]” at his studio.

In her lawsuit, Jane Doe said that she felt “emotionally overwhelmed, anxious and violated” over the alleged situation. She also said that she continues to suffer from “anxiety, stress, depression, nightmares, sleep disturbances, post-traumatic stress, headaches, severe emotional distress and physical ailments.”

The lawsuit alleges that Jane Doe tried to resolve the situation via a private mediation with Snoop on Feb. 8, but was unsuccessful. The lawsuit further alleges that after the mediation session, he posted the following quote on Instagram: “Gold digger season is here. Be careful, nephews.  keep ya guards up and keep ya circle small.” He did not reference Jane Doe or the lawsuit in his caption, but Jane alleges that it was a dig at her in the court docs.

In conclusion, Jane Doe asks for “general, compensatory, and/or special damages in an amount according to proof of Plaintiff’s injuries, mental and/or emotional distress, medical expenses, actual financial losses, loss of past and future earnings, loss of salary and benefits, and all damages flowing therefrom an amount to be determined at trial.” She also wants “punitive damages … that will sufficiently punish, make an example of and deter future conduct by [Snoop, Don Juan, and other defendants] for an amount to be determined at trial.”