Dolly Parton has found success on the stage, on the screen, and soon – with her new Baking Collection with Duncan Hines – she’s going to give Betty Crocker a run for her money. It seems that everything Dolly touches turns to gold, and her marriage is no exception. Dolly and her husband, Carl Thomas Dean, will celebrate their 56th anniversary in 2022 – so what’s the secret ingredient to their lasting relationship? “You don’t want to start fighting,” Dolly says while speaking EXCLUSIVELY with HollywoodLife about her Duncan Hines partnership. “We made a rule years ago that we’d never argue because once you start that, it can become a habit, and that just goes on.”

“So, if there are times that things get a little tense, or we get a little sideways here and there, we just kind of walk off and come back later and make some joke,” Dolly tells HollywoodLife. “‘Well, we thought love was going be like this, all trust and bliss.’ And, sometimes, it can be other things as well.” Dolly also said another good thing about her and Carl is that they both have “a great sense of humor,” and their lovers’ quarrels never get too heavy. “We could put it back in place without we could make the point, but to get on with it and say, ‘Hey, we’re not going to fight over that.'”

It helps that, like any good duet, both Dolly and Carl are in tune with each other. “We’re good friends,” she says. “We have a good time. We have a lot of respect for each other, but we’re just good partners. We are very compatible — we both like the temperature the same way in the house. There’s a lot of things that other couples fight over, like the air conditioner or the heat, or any of that kind of stuff. We never did because we’re just very compatible in how we live, with our routines. So, it’s actually worked out really well for us.”

Of course, since Dolly was talking about her new Duncan Hines line – her Southern Style Banana and Southern Style Coconut cake mixes, along with her creamy Buttercream and Creamy Chocolate Buttercream frostings – the question had to be asked: who is the better cook, Dolly or Carl?

“Oh, I’m much better than him,” she says with a smile, “although he does cook pretty good.” Dolly’s husband learned his way around the kitchen because while she was off on the road, becoming the living legend that she is today, he was back home. “I was gone a lot. And so he had to either figure out how to cook for himself or starve,” she says, “because we never wanted anybody in our house.” Dolly says she and her husband were never ones to hire a personal chef, so they both discovered the joy of cooking in their own way. “He’s learned to cook, and he loves my cooking too, but he doesn’t do anything elaborate. He just cooks what he loves,” she says. And clearly, he loves Dolly. 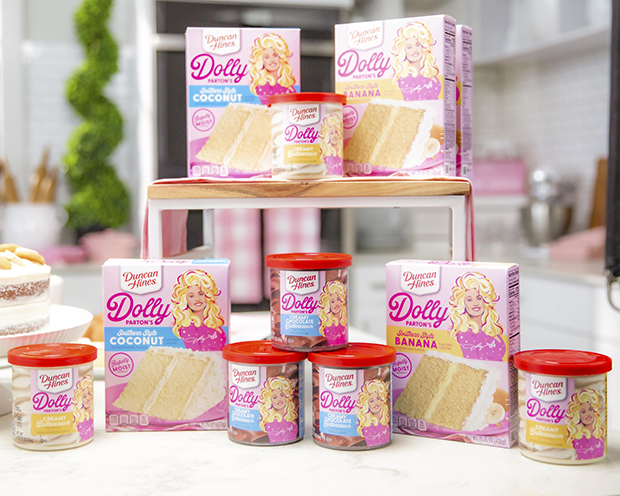 For those who are looking to cook up some romance and respect in the kitchen – or, as Dolly tells HL, those who “also want something sweet” – they can check out the Dolly Parton Baking Collection from Duncan Hines. “What’s great about Duncan Hines,” she told HollywoodLife, “[is that] even if you’re not a great cook and never did it before, you can just read on the back of the packet and follow directions and make all these wonderful cakes. But I’ve always liked Duncan Hines. I’ve always thought that was a wonderful company, and I love their products.”