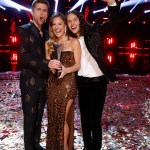 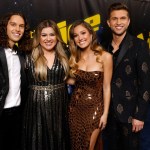 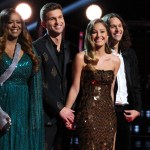 Even though Ariana Grande has no artists left in the competition on season 21 of ‘The Voice,’ she was still a big part of the show’s Dec. 14 finale! The singer took the stage to perform her latest hit with Kid Cudi.

Ariana Grande pulled double duty during The Voice finale on Dec. 14! Not only was the singer in her big red chair as a coach, but she also took the stage for a performance. Ariana was joined by Kid Cudi onstage, and they sang their duet “Just Look Up” from the Netflix movie, Don’t Look Up. The song was just released earlier this month, and this was the first time that the two publicly performed it.

As always, Ari wowed with her outfit for the performance, changing into a second ensemble from her show look. She wore a strapless yellow dress with a bow on the back. She also had on black gloves. Meanwhile, her hair was styled in a high ponytail.

This was Ariana’s first season as a coach on The Voice, but unfortunately, she had no artists left in the finale. Ariana’s final artists, Jim & Sasha Allen, were eliminated during the semi-finals on the Dec. 7 episode. However, that meant she got to breathe easy during the finale and just focus on enjoying all of the star-studded performances — including her own. Carrie Underwood, John Legend, Walker Hayes, Jennifer Lopez, and more also hit the stage to sing during the two-hour live show.

Ariana Grande Then & Now: See Her Transformation From Nickelodeon Star To Pop Princess 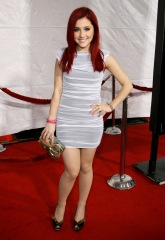 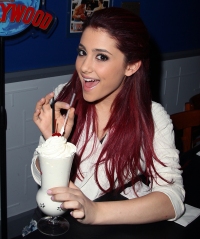 Meanwhile, Ariana’s fellow coaches — John, Blake Shelton, and Kelly Clarkson — all have at least one singer left in the finale. Kelly has two artists, Girl Named Tom and Hailey Mia, and so does Blake, with Wendy Moten and Paris Winningham representing his team. John has one contestant left, Jershika Maple after she received the Instant Save vote in the semi-finals.

Of course, all three coaches are no strangers to winning this show. Blake has won eight of his past 20 seasons as a coach, including the most recent season (20) earlier this year, while John has one win throughout five seasons and Kelly has three wins from her seven seasons. So far, it has not been confirmed which coaches will be returning for the show’s 22nd season. However, NBC did reveal that the show will only be airing one season a year (in the fall) from now on, so The Voice will not be returning until Sept. 2022.