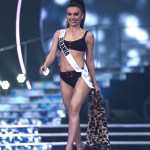 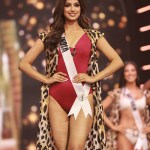 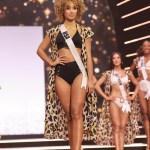 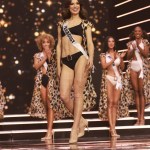 The stunner’s dazzling dress was enough to distract from the beauty queens on stage. She was one of the evening’s judges along with Adriana Lima.

Lori Harvey, 24, wowed while judging the annual Miss Universe pageant in Eilat, Israel on Dec. 12. The rising star turned heads wearing a sexy silver dress which showcased her glowing skin and delicate decolletage. The breathtaking frock featured intricate beading and embellishments along with skinny spaghetti straps and a low V-neck to highlight Lori’s toned shoulders and chest. Glamming things up, she wore her hang in romantic waves and had rocked flawless makeup.

The SKN by LH founder was joined by model Adriana Lima, 40, during her judging duties. The Brazilian bombshell also went for a sultry-chic look while donning a white jacket and sleek tresses with green statement earrings. The rest of the judges consisted of Puerto Rican actress Adamari Lopez, daytime TV star Rena Sofer, and Filipina model Marian Rivera,

Lori’s dad Steve Harvey, 64, was also around to host the evening’s affair. She goofed around him backstage, snapping the Family Feud star for social media. His hosting duties went smoothly as he crowned Miss India Harnaaz Sandhu, 21, as the winner. It was a far different scene than in 2015, when he accidentally announced the wrong winner on the air.

Harnaaz was beyond gracious as she accepted the honor. She admitted she was “overwhelmed”, reminding the audience it has been “21 years since India got the Miss Universe crown and it’s happening right now.” The queen offered some encouragement, saying “[I] believed in myself, and that’s why I’m standing here today.”

Lori and Steve’s trip abroad comes after her boyfriend Michael B. Jordan, 34, admitted he’s “in love” with the beauty. The Creed actor spilled his feelings without directly mentioning Lori while appearing on The View on Dec. 9. There, he told the table, “One of the things that helps me choose roles or which ones I stay away from is how much I feel like I have to give to the role. Certain life experiences I never had. So I didn’t feel like I could pull from a personal place. I could not make it connect to me. Now that I am in a place where I have fallen in love. I know what that’s like.” Michael can next be seen on screen in the romance A Journal For Jordan, out Christmas Day.