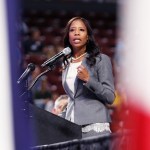 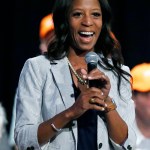 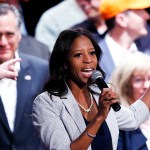 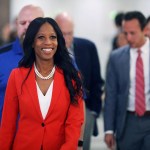 Mia Love joined the ladies of ‘The View’ at the table for her second time guest co-hosting on Monday December 6.

As the search to find Meghan McCain‘s replacement for The View continues, former Utah congresswoman Mia Love re-joined the ladies at the table again for her second stint as a guest co-host on Monday December 6. Mia, 46, first joined the table on September 8 for a brief stand as a guest co-host.

After Meghan bid The View farewell in August 2021, the series was left without its’ conservative voice. Ahead of the show’s 25th season, ABC announced plans to “tak[e] a little time” while trying out various personalities for the show, including politicians like former Secretary of State Condoleezza Rice and TV personalities like ex-Fox News anchor Gretchen Carlson. So far, Mia is the first guest co-host to return for second stint at the table. Here are five things you need to know about Mia here!

1. Mia was a congresswoman for Utah

Mia started getting involved in politics, after she moved to Utah in 1998. Mia was elected as a member of the Saratoga Springs city council in 2003, and held her position until 2009. She was then the mayor of Saratoga Springs from 2010 to 2014, via Ballotpedia. She first ran for the House of Representatives in Utah’s 4th District in 2012, but lost to Democratic incumbent Jim Matheson, but she ran again in 2014 and won. Mia won again in 2016, but lost her re-election in 2018 to Democratic candidate Ben McAdams. From 2015 to 2018, she served on the House Financial Services Comittee.

2. She spoke out against Donald Trump

Leading up to the 2016 election, Mia was one of the Republicans to go against her party and oppose then-Presidential candidate Donald Trump‘s election. She announced that she wouldn’t vote for him in an October 2016 Facebook post. “have said all along that I was still waiting for Mr. Trump to demonstrate his commitment to the kinds of principles and policies the people in Utah’s 4th Congressional District want in their elected leaders. Mr. Trump has yet to clear that bar and his behavior and bravado have reached a new low. I cannot vote for him,” she wrote at the time.

After she lost in 2018, she continued to criticize Trump, especially after he made a comment about her loss. ““The president’s behavior toward me made me wonder, what did he have to gain by saying such a thing about a fellow Republican? It was not really about asking him to do more, was it? Or was it something else? Well, Mr. President, we’ll have to chat about that,” she said, according to The New York Times. “This gave me a clear vision of his world as it is: no real relationships, just convenient transactions.”

3. She is a CNN contributor

Shortly after losing her re-election bid, Mia announced that she’d be joining the news network. She tweeted about her excitement to serve as a political commentator for CNN in a January 2019 tweet. “My time in Congress has ended but the chance to engage Americans is only beginning – I’m excited to join CNN to offer a different, principled and unleashed perspective,” she wrote at the time.

A new year brings new opportunities for elevated conversations about the issues that matter. My time in Congress has ended but the chance to engage Americans is only beginning – I’m excited to join CNN to offer a different, principled and unleashed perspective.

Mia joined as the director for the Center for Growth and Opportunity (CGO) at Utah State in June 2021. The CGO contributes research as well as training for students, connecting scholars and creating solutions to national issues, according to its website. In the announcement for her position with the university, Mia showed a strong belief in the organization’s goals. “The CGO’s data-driven, non-partisan approach to research is a breath of fresh air and exactly what we need in DC right now. I’m excited to get the data from the research out there and work with students to give them a unique perspective of how policymaking works,” she said.

Mia met her husband Jason Love, while he was a missionary in Connecticut. He recalled their first meeting as seeing her lean against a red car singing showtunes in a January 2015 interview with Deseret News. “I thought, hmmm, that’s intriguing, seeing a dark woman singing show tunes with a beautiful voice,” he said. Together, the couple has two daughters and a son: Alessa, Abi, and Peyton. Mia has a family photo with her husband and kids as her banner photo on Twitter.