While talking about Abby Huntsman’s surprise return to ‘The View,’ Joy remarked that she felt like the panel was ‘perfect.’

Did Joy Behar just drop a subtle diss directed at Meghan McCain? The ladies of The View have been looking back on the show in celebration of its 25th season, and during the Friday November 19 episode, the women welcomed former co-host Abby Huntsman back to the table. While discussing what Abby’s been up to since she left the show, she also mentioned how the show’s changed since she left.

Abby, 35, left The View in January 2020 after two years. At the time, she’d said that she was leaving to be an aide on her dad Jon Huntsman’s gubernatorial campaign in Utah. She opened up more about why she left in an October 28 podcast interview, where she claimed that the show had a “toxic” and “unhealthy” environment. “At that time there were executives in charge and that I did feel that we were kind of players in that game and it was about money and it was about ratings and the tabloids,” she said.

During the Friday appearance, she mentioned executives and other co-workers who made her time difficult, without naming names. “There were some tough days, and there were executives here at the time, and people here at the time, that made too many of my days too difficult, but all of them are gone, and you guys lived a lot of that with me,” she said. 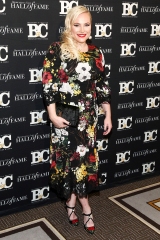 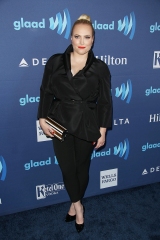 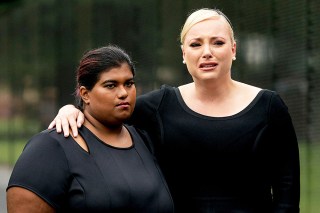 As Abby mentioned that she thought most were gone, Joy interrupted to note that she did miss a few executives.“Who I miss some of them. I do. I miss some of them,” Joy said, before dropping what some people thought was a little shade at Meghan. “I don’t miss—I mean, the panel’s perfect now.” A few fans thought that the comment was a shot at Meghan, and a few other fans just thought it was a fabulously shady remark.

Joy Behar just said the panel we have now is perfect!

Translation: We are happy Meghan is gone. #TheView pic.twitter.com/B8jV6iEapN

Joy saying she does miss some of the executives who have the left show, but the panel is PERFECT now. 😂😂 #TheView

While there’s no absolute way of telling if Joy, 79, meant to drop shade at Meghan, 37, this isn’t the first time fans have thought that the comedian was making a sly remark about the former co-host. During a September 15 interview with Reese Witherspoon, fans thought Joy mentioning that everyone got along “right now,” was in reference to her former colleague.

Since leaving The View in August, Meghan has opened up about her feelings about her time on the show. In her memoir Bad Republican, Meghan called the show a “toxic work environment” and spoke about how much it hurt when Joy said she “did not miss” her when she was on maternity leave. Whoopi Goldberg, Sara Haines, and Sunny Hostin have all responded to questions about Meghan’s claims about the show’s environment. Whoopi and Sara both seemed like they were avoiding drama when someone questioned them while they were leaving the show. Sunny mentioned that she “didn’t experience it the way she did” in a November 12 interview with The Cut. “No one can say that she didn’t experience it in that way because it’s hers. I didn’t see it that way. I didn’t experience it the way she did. But I’m going to defer to her that she experienced it like that,” she said.