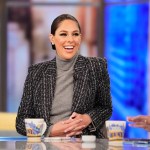 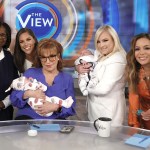 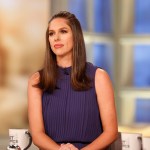 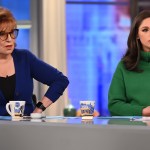 Just shy of a year and a half on the show, Abby Huntsman is quitting ‘The View’ because her ‘No. 1 priority’ is her family. She has a new mission — learn more about the dynamite news personality!

Abby Huntsman, 33, had sad news for those tuning into the Jan. 13 episode of The View: she’s quitting the show. “This is always such a hard thing to do…but today I’m saying goodbye. My No. 1 priority has always been my family,” Abby announced on the show, adding, “I couldn’t be more excited to help someone I love.” That someone is her own father, Jon Huntsman, Jr., 59, whom she’ll be helping as he campaigns for his old job — the governor of Utah. Abby did tease the possibility of a return, however. “I’ll be back at this seat, you never know,” Abby teased. “Life is funny that way.”

The View’s executive producer provided the following statement to Fox News (Abby’s former employer): “We have some bittersweet news to share. Abby Huntsman is leaving ‘The View’ to help run her father’s campaign for Governor of Utah and to spend more time with her young family. As you will see in her note below, she made the tough decision to move on over the holiday break. From the moment Abby joined us a year and a half ago, we knew how important her big family is to her. Isabel charmed us each time she came to the show and we shared Abby’s journey as she welcomed her twins, William and Ruby. Her dedication to family is what is launching Abby’s next exciting chapter. When your father asks you to help run your campaign, it’s a hard one to say no to. We thank Abby for her unique, intelligent, insightful and relatable voice that she brought to the show both in front of and behind the camera. We will truly miss her and her great spirit professionally and personally.”

Now, learn more about the talented television personality and journalist!

1. Abby has a long history with ABC, which airs The View. She became Good Morning America‘s assistant booker after graduating from the University of Pennsylvania in 2008 and also worked as a news desk assistant for ABC News. Her career appeared to come full circle when news broke that she’d be joining The View in Aug. 2018. “I couldn’t be more be excited to return to my professional roots at ABC News,” Abby wrote in the official press release at the time. “I look forward to adding my own point of view to the most interesting and successful talk show on television today. Joining the women at The View really is a dream come true!”

2. Abby’s resume is well-rounded. Following her original stints at ABC (before The View), Abby went on to work as a host for HuffPost Live in 2012, then MSNBC’s The Cycle in 2013, and eventually Fox News– where she really made a name for herself — in 2015! But Abby didn’t always follow such a linear journalism track. Before Fox & Friends, Abby dabbled in public relations at the international public relations firm Burson-Marsteller and worked as an adviser on a certain someone’s presidential campaign in 2012.

So thankful for my seat at this table. A dream come true. Utah here we come! #familyfirst❤️ @TheView pic.twitter.com/ME8SEwiAQB

3. Her dad played a big role in US international affairs. Abby Huntsman’s father is Jon Huntsman, Jr., was the U.S. Ambassador to Russia during Donald Trump’s presidency, and resigned from his post in Aug. 2019. Back in 1992, he was appointed as the U.S. Ambassador to Singapore at 32 years old, making him the youngest American ambassador in over 100 years, according to the National Governors Association. Before his current role, Jon was also a Republican presidential candidate in the 2012 election (that Abby helped with) and the governor of Utah from 2005-2009. Like father, like daughter! But Abby swore her politically-connected dad had nothing to do with her career success. “I went through the same audition process as everybody else,” she told the New York Daily News in 2013, regarding her new gig with MSNBC at the time.

Nearly a decade after serving as Utah’s governor, Abby’s father announced he’ll be joining the 2020 election for the same position in Nov. 2019.

"Today, I'm saying goodbye."@HuntsmanAbby announces she is leaving @TheView to help run her father's campaign for governor of Utah: "It's not often in life that you get these moments to go fight for something that you are so passionate about." https://t.co/VTJUxjEuW6 pic.twitter.com/XsGahw3VPc

4. Abby has the cutest family. She has one of those love stories we envy! The news personality wedded her college sweetheart, Jeffrey Bruce Livingston, on Aug. 28, 2010. They welcomed their first child, Isabel Grace, on Nov. 30, 2017. Abby is absolutely smitten with her baby daughter and role as a mother, considering her career! And we’re not just talking about journalism.

5. Abby is an author! Abby published her first book, Who Will I Be?, in Oct. 2018. It’s a children’s picture book starring a character named after her own daughter, Isabel!