Megan Fox and Machine Gun Kelly have taken their love to Greece! The A-list couple recently traveled to the Greek island of Santorini, where they were photographed enjoying an intimate lunch date on Nov. 10. Megan, 35, indulged in some PDA with her 31-year-old rockstar boyfriend, as the actress lovingly wrapped her arms around MGK in the middle of their meal. The “Bloody Valentine” singer lightly leaned in and rested his head against Megan’s shoulder during the romantic moment. See the photos HERE. 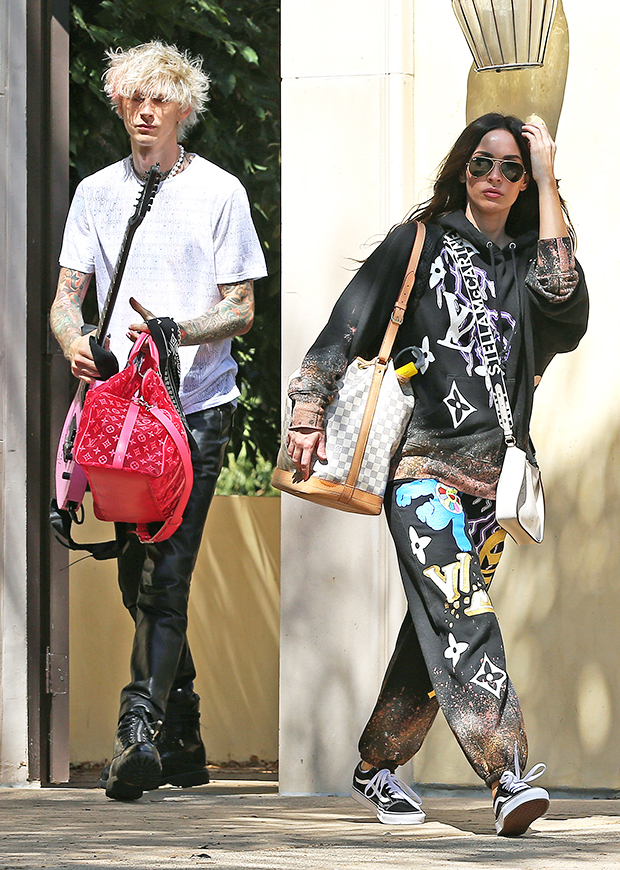 The lovebirds were dressed fairly casual for their mid-day outing, which included some shopping time for the couple. Megan wore a gray tank top, as well as a hoodie and tracksuit pants that matched. The Transformers star walked around with comfortable sneakers on, and she accessorized her look with a black hat and a brown purse that she strapped around her shoulder.

Meanwhile, MGK looked super laid back in a black hoodie sweatshirt and matching tracksuit pants. He wore a white hat that had his stage name engraved on the side, as well as white sunglasses and a chain necklace. The rockstar removed his hoodie during the lunch date, which showed a white T-shirt underneath. Some of MGK’s neck tattoos were also fully visible in the photos.

Megan and MGK have been going strong for over a year and a half now. The pair first connected while filming the movie Midnight in the Switchgrass together in early 2020, after the actress split from husband Brian Austin Green. Since then, Megan and MGK have shown off some major PDA during Hollywood events, vacations, and even double date nights with their pals Kourtney Kardashian and Travis Barker. Speaking of “Kravis,” a source told HollywoodLife EXCLUSIVELY in October that Kourt and Travis’ romantic engagement could impact Megan and MGK taking the next step in their own relationship.

“Megan has looked at the engagement between Travis and Kourtney as a wonderful thing,” our insider said. “She is so happy for them but it really has sped things up in her mind and she wants Colson [MGK] to make the same commitment. She would love nothing more than to get engaged and then married to him.”