Machine Gun Kelly casually debuted a brand new look on Aug. 10 — he shaved off his hair and revealed a tattoo atop his bald head in a photo posted to Instagram.

Say goodbye to Machine Gun Kelly’s chin-length blonde hair, because he’s taking a page out of his pal, Travis Barker’s, book with a completely shaved head these days (well, maybe)! The rapper took to Twitter on Aug. 10 to tease an upcoming project by sharing a photo of himself FaceTiming with music video director, Cole Bennett. Although the rectangle with MGK’s face in the screenshot is small, he has appeared to have shaved off his hair and is now rocking a bald head.

i shaved my head for this @_ColeBennett_
“papercuts”
tomorrow 9pm 🎬 pic.twitter.com/YZCKG791B8

“I shaved my head for this,” he captioned the photo, also teasing that the video for “Papercuts,” which the pair collaborated on, would be coming out on Aug. 11 at 9:00 p.m. In the FaceTime shot, the never-before-seen tattoo on the top of MGK’s head is fully visible. However, some fans aren’t convinced that the 31-year-old actually shaved all of his hair off. Many commented about how they’re convinced it’s a “bald cap” for the video.

We’ll have to wait and see when new photos of MGK pop up, but just one day before the potential hair makeover, he shared a video of himself still rocking his blonde ‘do. In the video, he and Travis showed off their new, matching forearm tattoos, which read, “Born with horns.” It appears to be the title of their next collaborative album, as MGK captioned the post, “”Born With Horns” the album…we’re back for round two.” Travis previously produced MGK’s 2020 album, Tickets To My Downfall, as well. 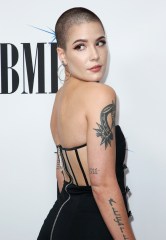 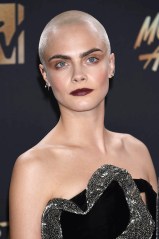 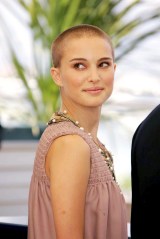 While Machine Gun Kelly definitely seems to be focused on the music these days, he’s also very into his relationship with girlfriend, Megan Fox. The two have been together for more than a year after meeting on set of their movie, Midnight in the Switchgrass, in early 2020. Since getting together, they’ve been practically inseparable. Meanwhile, Travis has been dating Kourtney Kardashian since the beginning of 2021, and the foursome has been spotted out on double dates on a number of occasions.