Party’s here! Vinny Guadagnino has some special guests on the Nov. 4 episode of ‘Double Shot at Love’, and we have an EXCLUSIVE sneak peek!

Vinny Guadagnino is calling in some reinforcements on the Nov. 4 episode of Double Shot At Love. In an EXCLUSIVE preview of the episode, he sits down to talk with his pals, Pauly D and Nikki Hall, about where he stands in the process of finding a woman so far. “I’ve formed some really strong connections, but the more that I narrow it down in this process, the harder it is to break up with someone,” Vinny admits. “I’ve been vibing with a lot of these ladies on a lot of different levels. I’m trying to get to know everyone so I can figure out who is who.”

Pauly and Nikki have been by Vinny’s side every step of the way so far, but this week, there’s some extra help coming in — Jersey Shore co-stars, Jenni “JWoww” Farley and Nicole “Snooki” Polizzi! The girls arrive as the trio is having lunch. “I invited Jenni and Nicole because they really care about me,” Vinny explains. “They are definitely solid reinforcements. We’re going to learn a lot about these ladies through their interactions with Jenni and Nicole.”

Once everyone says hello and gets settled, Pauly fills JWoww and Snooki in on what’s going on. “I’m so glad you guys are here,” he says. “This guy’s taking this process so serious. It’s scary and I need help. It’s wild. I’m very happy.” 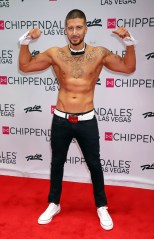 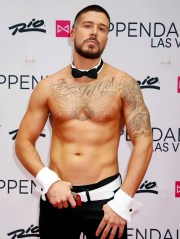 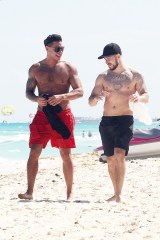 Snooki lets Vinny know that she’s “proud” of him for taking everything so seriously. In a confessional, she adds, “We’re Vinny’s sisters and we’re here to help him find love.” JWoww adds that she and Nicole are the “best matchmakers,” too. We’ll have to wait and see if they’re really able to give some good help, though! The next episode of Double Shot At Love airs on Thursday, Nov. 4 at 9:00 p.m on MTV.