The human experience is a complicated one. There’s joy, there’s sadness, and a whole mess of emotions in-between. To distill these multitudes down into a three-minute song is a daunting task, but Arrested Youth makes it look easy on Nonfiction. Over the course of fifteen tracks, Arrested Youth (aka Ian Johnson) covers a wide range of subjects, from the awkwardness that comes with growing up (“Find My Own Way,” “Woke Up In This Body”) to anxiety and alienation (“Paul McCartney”) to angst at an increasingly commercialized world (“1984”), and the pain of loss (“My Friend,” “Leave My Casket Open…”). With heartfelt lyrics paired with production that draws sounds from punk, hip-hop, and pop, Nonfiction walks the balance between introspective and inspirational, between being positive without being cheesy – and while this seemingly comes naturally to Ian, he tells HollywoodLife he feels “the challenge” of that push-pull “on every song.”

“I didn’t feel it throughout the making of the album,” he tells HollywoodLife, “because I didn’t know I was making an album making it. But I always feel that juxtaposition and tension while writing each song. Whenever making a song, I’m trying to challenge myself: ‘I want to say this, and I think about it — not overthink it, I think, and I say, ‘is that the full story? Is that really like does that really add layers?’ Or is that just like too on the nose? And I always think about life that way. I think about lyrics that way. I think about my songwriting process that way for sure.”

“This album was actually a collection of songs – originally, it wasn’t like I went in to make an album,” he adds. “We just made so much music so quickly that it felt like an album. It was just like, ‘this is enough music. I want to make an album. I think it’s time.’ So it actually, it’s called Nonfiction because I have all this music. It didn’t have a theme. It wasn’t like a mapped-out concept of an album, but I knew it was honest songs about where I was at in my life. So I said, ‘Let’s not try and fit a square into a circle,’ or whatever the phrase. ‘Let’s be honest with and say, ‘this is honest music.’ Hence, the title, Nonfiction.”

Nonfiction arrived at the start of the summer, but Ian shares that the album was “done and finished for over a year.” Since then, he’s been busy writing music, and he shares that this next chapter of his career will be a slight departure. “With Nonfiction, obviously it’s very lyrical – it has a lot of hip-hop influence. So where I’m going next, I think you’re going to see a lot of that hip-hop fade.”

“It’ll still be creative songwriting and lyricism in its own right, but I think you’re just getting to see the presentation mature and change a little bit and be something that maybe the human ear doesn’t have to spend work as hard to follow,” he says. Nonfiction, according to Ian, is an “anxious album,” one that “keeps you alert.” It’s an album of the times since this is an anxious time for an anxious generation. But, that human experience is complex, and one can’t be anxious all the time. So, he says his next step is to “create a body of work that provides some different emotions to it.”

Does he feel less anxious in 2021? “In ways, for sure, and in some ways, I don’t.” Personally, Ian is comfortable in his own skin. From the first time you talk with him, it’s clear that he’s confident in who he is. But, in terms of the world – “and the development of my career, and the development of everybody’s lives?” he says – there are still some underlying anxieties. “And, I think that’s probably fair to say of anybody. How can you be someone — let’s make it a smaller subset and say, how can you be someone in the United States right now and not feel anxious? A lot of anxiety comes from uncertainty. And find me someone who can argue that we’re not living in an incredibly uncertain time right now.”

It’s with cautious optimism and utmost dedication to be “as safely as I possibly can” that Arrested Youth began his summer tour. Wrapping up in mid-September, the Nonfiction tour has taken him around the country. Less than a week after the final date, he’ll join twenty-one pilots for a string of shows in Denver, Los Angeles, and Chicago. “We’ve really kind of built up built out a game plan for how we’re going to protect ourselves,” he tells HL, speaking before the Nonfiction tour began. “ I made it, you know, a policy for our crew for everybody to be fully vaccinated. We’ve changed our whole [setup]. How we act at shows and how we run the merge booth. All that stuff has definitely changed.”

“I used to be the opposite of a germaphobe in the sense that I was the first one jumping into crowds and hugging everybody and doing all of that. And now, I’m a little more cautious. And that’s not just for me, that’s for everybody there, and that’s for the band. If one person gets sick on our tour, then we jeopardize doing the rest of our tour, we jeopardize doing the twenty-one pilots tour.” And for an artist on the rise like Arrested Youth, that’s not a risk he can take – nor is it an opportunity he can pass up.

“I was just thinking about the other day,” he says. “I just put out an album, and we have these two tours that are really, really big for me to take the next step in my career. If I was an artist who was completely established and could sell out shows wherever I wanted — you know, sell lots of tickets — I don’t know if it would be the same discussion of ‘do we go out on the road right now?’ It’s all based on each artists’ career, and then assessing the risk that you’re willing to take in this time to continue building your career – while also keeping yourself — your band and your fans – and just being mindful of everyone in the country that this thing is spreading.”

At the end of 2021, Arrested You should be established as one of the biggest stars in the new alt-sound, having waved the flag for the genre for years. It’s a sound that’s en vogue at the moment, with Gen Z playing with harder sounds of punk, metal, and rock. “I think it comes down to underlying emotions of the youth, for sure,” Ian says when asked about the rise in alt popularity. “It’s anxiety, and it’s uncertainty. It seems as though that this movement has provided tons of room for artistic expression. It just opens up more of these angsty looks in culture and fashion and just overall appearance.” 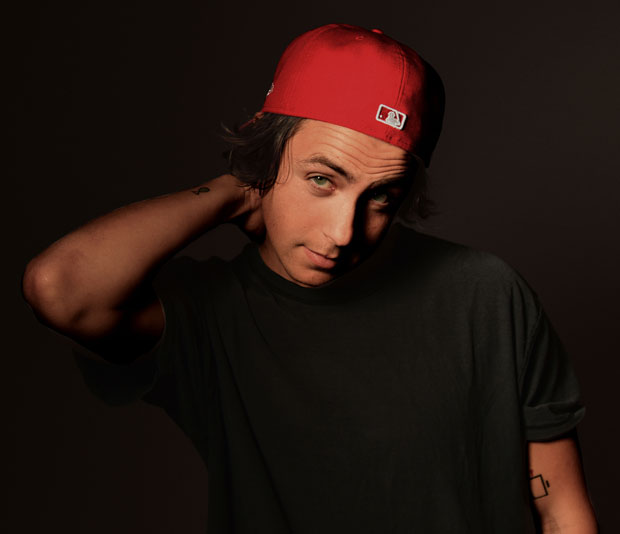 “And I think what this new revival, a big part of it is, the music is important, but the culture, the energy, and the angst is what is driving it,” he adds. “And that makes complete sense because that’s what young people are feeling. I think it provides an emotional outlet.” These harder sounds “provide a different feel emotional feeling that rap doesn’t provide or pop doesn’t provide,” says Ian. “It provides that that youthful, rebellious feeling that everyone has, no matter what age, at some point. It just providing another emotion rap provides cool, and it provides lifestyle feelings, right? Pop obviously provides that that happy go lucky feeling. And then you got this rock space that’s providing this real rebellion and sense of fighting through self-deprecation and all these things.

What does the future hold for Arrested Youth? Will he continue to rebel, to fight through these emotions? “I think I will continue to develop,” he says. “I will take some more risks. I want to take more risks, but there are going to be risks that feel genuine to me.”

“For me, it’s always been focused on the show. I focus on the music. I’ve focused on doing small things that are new and different for me and Arrested Youth, but keep it still to its roots and to who I am,” says Ian. “But I do know [Arrested Youth] is still finding its way upwards, especially in the music and the live show. I think those are two places that I’ve put a lot of my cards right now — how we perform live and how we create records. And I think long term, I’m going to be very happy that those are the places I really chose to put my time.”