Ashton Kutcher apparently didn’t take French in high school because he failed to nail the accent – but he succeeded in making his wife, Mila Kunis, crack up!

While filming a new promo for his and Mila Kunis’s charity wine brand, Ashton Kutcher decided to channel the spirit of France’s wine country. Or, he tried. “Bonjour! Comment Allez-Vous?” said Ashton, 43, while Mila, 38, filmed him. “It is I, Ash-ton Kut-CHER, at Chateau Fancy as F-ck. We are here today to tell you about ze new, amazing Outside Wine. It is a –” said Ashton, ultimately dropping the accent amid snickers and giggles from Mila. “What a transition, babe,” she said, and Ashton replied, “What – are you hazing me off-screen?”

After an attempt at a restart, which saw Mila tell her husband to skip the French part and start at the line about Paul Newman (“Are you directing me? Are you the f–king cameraman or the director?” asked a stunned Ashton), Ashton was able to share the new wine project. However, that wasn’t the end of the interruptions. “Is that a giant tractor in my serene setting for my amazing wine video?” asked Ashton before letting out a frustrated groan. Later in the video, Mila focused on a random black dog that walked into frame, prompting Ashton to ask, “Am I that boring?” When Mila chimed in to explain that Outside Wine is because it’s “outside the box,” Ashton remarked, “You’re the worst cameraman/director ever — for all time! I still love you but—sorry, camerawoman.” However, a heartbeat later, Ashton let out a laugh, showing that despite it all, he was having fun.

While Ashton and Mila joked around during the IG video, they were serious about their new wine project. “I’ve always been a huge fan of Paul Newman,” said Ashton. “Not only was he an unbelievable, extraordinary actor, but he used his position, and he used his celebrity and fame to do some extraordinary good in the world through his Newman’s Own [Foundation]. So, in the middle of the pandemic…Mila and I launched a wine called Quarantine Wine, where we managed to raise a million dollars to give to charity,” added the Two and a Half Men star. 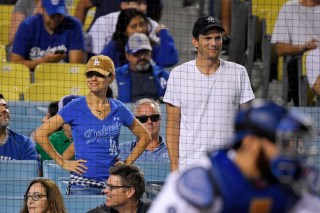 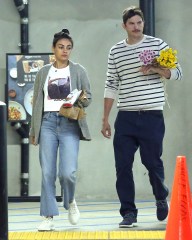 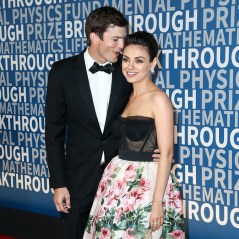 So, with that success and taking inspiration from Paul Newman, Ashton and Mila launched Outside Wine, starting with a cab-syrah blend. “We partnered with someone else that I admire very much, Tony Hawk, who has this thing called The Skatepark Project and builds skateparks for kids,” he said, noting that profits from Outside Wine will benefit The Skatepark Project and Thorn.org and every three months, they’re going to add another charity. “I hope you enjoy it as much as we do,” Ashton said with a laugh. “I hope you can support us in supporting others through having fun and drinking wine. Cheers!”