Wow [Austin Butler], I can’t believe your(sic) 30!!! Welcome to the club, buddy!” Ashley Tisdale wrote on Aug. 17, the day that the Shannara Chronicles star left his twenties behind. Along with her message, Ashley, 36, posted photos of her and Austin throughout the years. “You’ve been my best friend since you were 15, so that’s 15 years strong of friendship!” she added. “I am beyond proud of you and everything you’re accomplishing but most importantly proud of the person you are.” 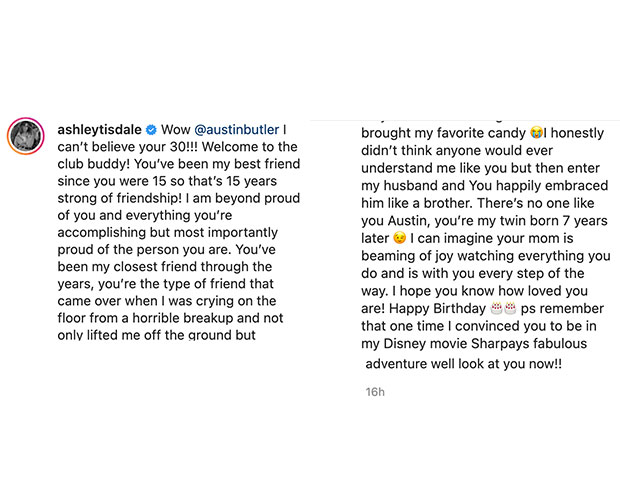 While Ashley was feeling proud, some fans said they were “cringing so hard right now” because here was Ashley, the best friend of Vanessa Hudgens, gushing over Austin, Vanessa’s ex. Other commenters expressed how awkward this might be for Vanessa, 32, who was with Austin for nine years before they called it quits in January 2020. Other commenters on Ashley’s birthday post pointed out that both Austin and Vanessa have moved on: Vanessa has struck up a romance with MLB star Cole Tucker, and Austin and Lily-Rose Depp went public with their love earlier in August 2021.

If there was any “cringe” or awkwardness with her post, Ashley wasn’t feeling it. She instead took a moment to wish her “closest friend through the years” a Happy Birthday. “You’re the type of friend that came over when I was crying on the floor from a horrible breakup and not only lifted me off the ground but brought my favorite candy [crying emoji],” wrote Tisdale. “I honestly didn’t think anyone would ever understand me like you but then enter my husband [Christopher French], and You happily embraced him like a brother.”

“There’s no one like you, Austin,” continued Ashley. “You’re my twin born 7 years later [winky face emoji]. I can imagine your mom is beaming [with] joy watching everything you do and is with you every step of the way. I hope you know how loved you are! Happy Birthday [cake emoji]. ps, remember that one time I convinced you to be in my Disney movie Sharpay’s Fabulous Adventure? Well, look at you now!!”

If Austin – who played Peyton Leverette in the High School Musical spin-off –  turning 30, or that Fabulous Adventure is ten years old isn’t shocking enough, Sharpay became a mom this year. Yes, Ashley and Christopher welcomed their daughter Jupiter Irish French in May. “I knew [Chris], and I would have a cute baby, but I wasn’t expecting how beautiful she would be,” wrote Ashley when sharing the first pictures of her little girl.