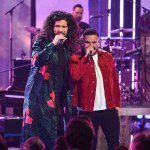 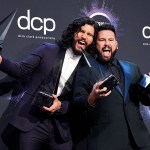 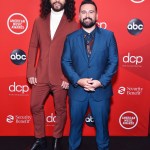 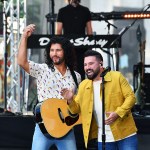 Ahead of the release of Dan + Shay’s new album, ‘Good Things,’ the guys dished about what it was like to make a record during the pandemic. Plus, they hinted at what to expect from the setlist on their upcoming tour!

Dan Smyers and Shay Mooney, who are better known as the country music duo Dan + Shay, will release their fourth album, Good Things, on Aug. 13, 2021. It will be their first full record since Dan + Shay, which came out in 2018. Of course, right off the bat, making Good Things was different than anything that the guys have done in the past — because they had to plan, write and record most of the album during the COVID-19 pandemic!

“I think there was a blessing and a curse that we had making this record,” the guys told HollywoodLife and other media outlets during an interview on Aug. 11. “It’s been a crazy year, but the one thing we did have was time. That’s something we haven’t had [recently]. You have your whole life to make your first record, then very little time in between tours to make something that you’re super proud of, with very limited time on the road. So, this time, one thing we did have was a lot of time. It’s amazing, but it’s also a different process when you’re putting it together. You’re starting to overthink things.”

Shay also praised Dan for how he used all that time to be even more “meticulous” than ever about the production on this album. “He spends a lot of time on the details, and that’s what’s so great about it,” Shay gushed. “It was amazing for me to sit back and watch the genius of the production of this record. I’m very proud of him and how much of a masterpiece his production is on this record. It was incredible to watch that.”

Overall, the guys said that making Good Things was a “fun process,” and it led to them creating the project that they’re “super proud” of. “We think this is our best album, by far,” Shay admitted. “We had the time to think through things, but also keep ourselves at bay, not trying to overthink it. We’re super proud of this record and the whole process was really fun to be able to do this together.”

In addition to the album, Dan + Shay also have a massive arena tour coming up. The tour was originally scheduled for 2020, but got postponed amidst the coronavirus, and will now kick off in South Carolina on Sept. 9. Of course, Good Things didn’t even exist when the tour was first supposed to happen, so the guys will have to do some tweaking to their setlist now that they have so many new songs to choose form.

“It definitely complicates it — in a good way!” Shay said. “Since we were playing our last arena tour, we hadn’t even really got to play “10,000 Hours” at that point, and then everything shut down. So it’s definitely an interesting process. It’s really cool to have a few more songs in our arsenal. It’s really cool to be able to do that, but it also made it more difficult trying to pick. What songs do we keep in there? There’s always going to be someone who’s like, ‘You didn’t play my favorite song!’ But unless we’re playing for three hours, it’d be really difficult to fit in every song that somebody loves and wants to hear.”

However, the guys promised to “keep a lot of the old stuff in there that people really reacted to live,” in addition to “some new stuff.” Luckily, fans will have some time with the new album before the tour begins, too. “I feel like this record, people are going to react to it, and hopefully they’ll want us to play the songs live,” Shay concluded. “We’re definitely going to be doing a lot of new songs. It’ll feel very fresh to us, as well, which is exciting!”