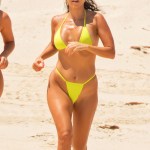 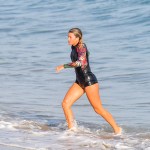 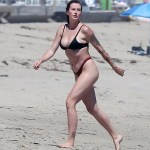 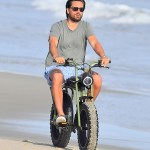 The ‘Selling Sunset’ stars were all smiles as they enjoyed a workout, poolside while vacationing in Mykonos, Greece just five days after making their romance official.

Chrishell Stause, 40, and Jason Oppenheim, 44, worked up a sweat during their workout while vacationing in Mykonos, Greece. Chrishell took to her Instagram stories on August 2 to share the moment of her wearing a pink bikini during the workout session.

In the short clip, the blonde beauty was all smiles while laying on top of Jason while he was doing push-ups, poolside. She captioned the post, “being tough on the boss,” along with a wink emoji.

Earlier in the day, Chrishell shared a picture of her in the same pink bikini, which had cutouts on the top, and showcase her toned physique. She opted to have her hair in a ponytail and completed the look with pink lipstick and pink nails. Posing next to a bottle of Grey Goose Vodka, Chrishell hilariously captioned the photo, “Trust me, you can dance! – Vodka”. Fans sounded off in the comments on the cheeky post. One fan commented, “Living your best life.” While another asked, “Was this ur secret weapon on DWTS?” one fan asked with a fire and heart emoji. 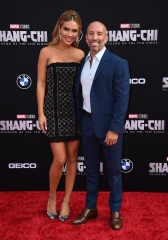 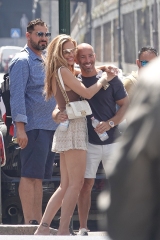 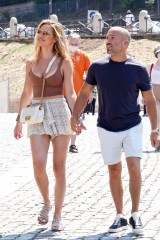 The workout video comes just five days after Chrishell and Jason confirmed their new relationship on Instagram. The former Dancing With the Stars contestant shared a series of pics from her Italian vacation with her beau and his twin brother Brett, Brett’s girlfriend Tina Louise, and fellow Selling Sunset stars Mary Fitzgerald and husband Romain Bonnett on July 28.

The duo have been sharing a slew of PDA-packed moments from their getaway. In the Instagram story clips to follow their workout, the two showed off their stylish summer attire and dance moves at Principote luxury beach club. Chrishell opted for a mesh sparkly blue-green sleeveless dress for the occasion, while Jason wore black shorts with a peach t-shirt. In the clip, Jason gently kissed Chrishell on the neck and has his arm around her as they danced the night away.

As of now, the blossoming romance appears to have a seal of approval from fellow co-stars including Mary, who is not only Jason’s ex-girlfriend but also currently vacationing with the couple. In a previous interview, Mary shared with HollywoodLife, exclusively, that the actress turned realtor has a lot to offer someone. “She’s so funny, she’s so funny. What shocked me the most is how witty she is. She’ll say stuff on the show and I’m like ‘Oh yeah, she’s pretty cute,’ like when she says stuff. But she has these witty remarks and she’s so quick. She’s a very fun person to be around.”

Previously the beauty was linked to Dancing with the Stars pro Keo Motsepe, 31, who called it quits in late Feb. 2021 after a three-month romance. Prior to that, Chrishell was blindsided by her This Is Us star husband Justin Hartley,’ filed for divorce in November 2019. Justin has since married, Sofia Pernas.