UPDATE: Hailey Baldwin is squashing any pregnancy speculation that resulted from Justin Bieber’s recent “mom and dad” caption on Instagram. After he labeled them “mom and dad” in this Instagram photo, she replied, “I think u should maybe change this caption to *Dog Mom and Dad* before anyone gets it twisted.” 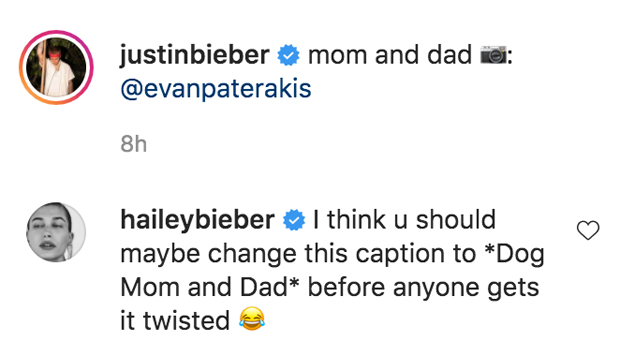 ORIGINAL STORY: Justin Bieber, 27, took to Instagram on Monday, July 19, to share more cute photos with his wife, Hailey Baldwin, 24. But it’s not the images that fans are now talking about — it’s a cryptic caption that the singer wrote alongside one picture in particular.

Next to a black and white photo of him and Hailey lounging in tropical wear, Justin wrote, “mom and dad”, leading many of his followers to believe that he’s teasing a potential pregnancy. So is Hailey expecting? HollywoodLife reached out to both Justin and Hailey’s reps for comments, but we did not receive immediate responses.

However, fans have been jumping to that conclusion in the comments section ever since Justin shared the photo. “Wait what? MOM AND DAD?!,” one commenter wrote, while another asked, “Baby on the way?” And one commented later asked, “YALL having kids?!”

Justin and Hailey haven’t reacted to any of the comments on the post just yet, but the “Sorry” singer recently told Ellen DeGeneres that he and Hailey want to wait before they start a family.

“I’m going to have as many [kids] as Hailey is wishing to push out,” Justin said on the Dec. 1, 2020 episode of The Ellen DeGeneres Show. But he further explained that they’re waiting to have a baby. Even though he said, “I’d love to have myself a little tribe, but it’s her body, so whatever she wants to do”, he added, “I think Hailey still has some things she wants to accomplish as a woman”.

HollywoodLife also EXCLUSIVELY learned the couple is in “no rush” to have a baby. “Justin and Hailey‘s plan is to continue waiting on having a baby and starting a family,” a friend of the family’s told us in Jan. 2021. “They both want kids, but they have told friends they want to enjoy being married for at least a couple of years before starting a family.”

HollywoodLife reached out to both Justin and Hailey’s reps for comments, but we did not receive immediate responses.