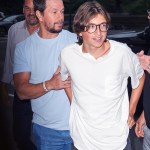 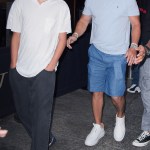 Mark Wahlberg’s son Michael has gotten nearly as tall as his superstar dad. His son even looked like the actor in his younger days.

Mark Wahlberg‘s, 50, son Michael, 15, has definitely hit his growth spurt. The teen was almost the same height as the Boogie Nights actor. The pair were seen on a rare family outing, getting dinner together at Nobu in New York on Tuesday July 13. Mark rocked a classic and simple look, wearing a blue t-shirt and jean shorts with white sneakers. Meanwhile, Michael looked a little more relaxed and casual, wearing a plain white t-shirt, black jeans, and glasses.

While Mark sported a beard and short haircut, Michael wore his hair longer, about shoulder-length. It’s easy to tell Michael is his father’s son, because he looks so much like the actor, especially in some of his roles from earlier in his career like Rockstar or The Big Hit, albeit with longer hair. Michael is the second oldest child that Mark had with his wife, model Rhea Durham. The actor’s other children are Ella Rae, 17, Grace Margaret, 11, and Brendan Joseph, 12. Mark and Rhea have been married since 2009. It looks like Mark has been getting plenty of family time in recently. Besides the dinner at Nobu, Mark shared a video on Instagram from a beach day on July 9. Rhea was snapping a photo of Michael and his two younger siblings, while Mark filmed the beach. “Beach day and no one showed up?” he wrote in the caption. 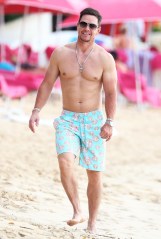 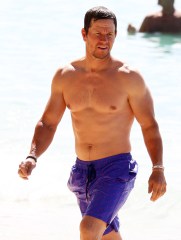 Besides going out for family dinners, Mark has been plenty busy lately. His movie Infinite was released on June 20, and he starred in rapper Joyner Lucas’ music video alongside Diddy and George Lopez for his song “Zim Zimma,” which was released on May 18. Mark’s also been hard at work getting into shape after he gained about 20 pounds to play Stuart Long in the movie Father Stu. On June 16, he posted a video on Instagram, showing himself working out to shed the weight from the movie. “I got these youngsters angry,” he wrote in the caption. “Performance Inspired Nutrition works! Working out is only 15% of the equation. 85% nutrition and recovery. A little old head wisdom.”