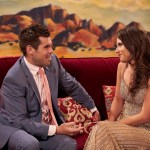 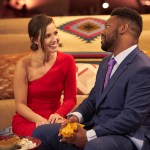 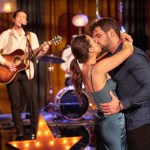 Two guys on ‘The Bachelorette’ took their drama from real life to the show, and it led to Katie Thurston eliminating one of them on the spot.

Katie Thurston sent Cody Menk home in the middle of a group date during the June 14 episode of The Bachelorette. The trouble started during the day portion of the date, which saw the guys wrestling each other in a mud pit. Cody was paired up against Aaron Clancy, and the tension between them was obvious before they even got in the ring. “Cody and I know each other from back home and I’m not a fan of him,” Aaron admitted. “he knows that. He’s not here for the right reasons.”

Aaron won the wrestling match, which led to him getting some alone time with Katie. She immediately addressed what she noticed between Aaron and Cody, and asked him to explain what was going on. “I was surprised to see him here,” Aaron told the Bachelorette. “We’re not really cool. We’re not friends. There were just some social media posts and things he did that kind of rubbed me the wrong way. I know he really wants to become famous or get on the show for other reasons. The way he handles situations, to me, I find disturbing. He handles things in a way that is malicious, in my eyes. It’s just not the energy I want around me.”

Katie was understandably not happy to hear Aaron’s concerns. “I’m annoyed,” she said in a confessional. “I can’t even explain how I’m feeling right now. One of my biggest fears is someone being here who shouldn’t be. This is my real life. I’m here to fall in love. If you are here with a hidden agenda, that’s not going to be a secret for long.”

At the nighttime portion of the date, Katie immediately pulled Cody aside so he could give his side of the story. “Aaron let me know that he knows you from outside this bubble and he described you using words such as malicious and unkind,” she revealed. “That’s concerning to me because, for me, being kind is one of the most important things I’m looking for in a person.”

Cody insisted that he had “no idea” what Aaron was talking about, but Katie didn’t let it go without pressing further. Katie also brought up how Aaron said Cody was only on the show for fame. “I’m unsure what he’s talking about,” Cody admitted. “I wish I could clarify for you. We knew each other back in San Diego. We were never really friends.”

Katie expressed her frustrations and concerns about how one of the guys must be lying to her. Cody wasn’t convincing, either. After the conversation, Katie was very hesitant about him. “When I asked Cody about the whole chasing fame situation, he didn’t seem genuine,” she admitted. “He didn’t even have a facial expression of surprised or offended. He almost looked rehearsed. If someone said that to me, my face would say everything. I would be devastated if that was a lie. That’s a red flag.”

Ultimately, Katie made the decision to eliminate Cody. “Ultimately, I don’t feel that we have trust and it’s so early to feel that way and that’s unfortunate,” she said before sending him home. “So there’s really no point to drag this on any longer. Unfortunately, I think it’s best for you to go home tonight.” Cody wished Katie the best and left without a fight.