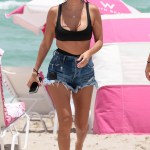 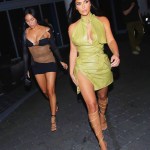 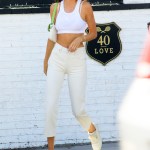 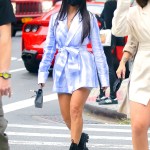 In this ‘KUWTK’ clip, Kourtney concocts a prank to play on Kendall after finding out that the model has been returning the gifts she’d given her for birthdays and holidays.

It’s Kendall Jenner’s birthday on the May 27 episode of Keeping Up With the Kardashians! In a new preview from the episode, the model’s older sisters, Kim Kardashian, Kourtney Kardashian and Khloe Kardashian, are all discussing what they’re getting her for the big day. Kourtney reveals that she has a great gift in mind, but she’s gifting it to Kendall as a prank of sorts.

“I started her this collection of Hermès china last year for her birthday,” Kourtney explains. “I got her tea cups and a tea pot and all the tea stuff. And then for Christmas, I added to it and I got her all the serving platters. So I was thinking I could add to it and get the dishes. So we called Hermès and I was like, ‘Can you send me photos of what I didn’t get yet?’ and they just said, ‘I can absolutely do that, but she returned everything you got her.'”

Rather than being offended by the returns, though, Kourtney just cracks  up. “What did she say when you gave them to her?” Khloe wonders. “She liked them!” Kourtney reveals. “In a few years, she’ll wish she had it. I want to be like, you think the joke’s on me because you keep returning it — well joke’s on you because I’m going to keep buying it! I’m going to still buy it for her for her birthday because I think it’s funny. I just want to give it to her again to see her reaction. I really just want to see her opening it and pretending it was the greatest gift.”

Kourtney, Kim and Khloe are all cracking up over the situation. “I thought this was such a great gift, I couldn’t even believe that Kendall didn’t like it,” Kourtney admits. “She definitely could’ve told me. I understand why she wouldn’t, it might be uncomfortable, but I really just find it funny.”

We’ll have to wait and see how Kendall reacts to getting another batch of Hermès china on the next episode of KUWTK! The show airs on Thursdays at 8:00 p.m. on E!