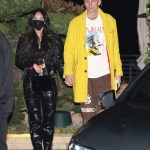 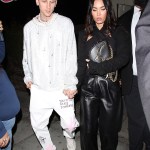 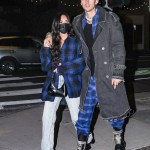 Machine Gun Kelly got a sweet birthday tribute from Megan Fox on Instagram, which included a never-before-seen selfie of the pair.

Megan Fox celebrated Machine Gun Kelly’s 31st birthday with an Instagram tribute on April 22. She posted a mirror selfie of herself and the rapper, along with the message, “Happy birthday blonde angel baby.” In the pic, Megan is wearing a see-through white crop top, along with high-waisted jeans, as she leans into her man with a big smile on her face. Meanwhile, MGK is snapping the photo in the mirror.

Earlier this week, MGK had a party for his big day, and Megan was by his side as he blew out the candles on his cake. Afterward, she even gave him a kiss on the lips, and the sweet moment was captured on video. MGK’s pal, Travis Barker, was also in attendance at the party, and he brought his girlfriend, Kourtney Kardashian, along for the fun. Machine Gun Kelly shared several photos from the night on Instagram, including one shot of himself and Megan with Travis and Kourtney.

These two couples seem to enjoy each other’s company, as they all attended a UFC fight in Las Vegas together at the end of March, as well. Plus, a source told HollywoodLife EXCLUSIVELY that the group also enjoys more low-key hangouts quite often. “They do dinners at home or hang out at the studio all together,” our insider revealed. “Kourtney has gotten to know [Machine Gun Kelly and Megan] through Travis and they’ve all become friends now.”

Megan and MGK have been hot and heavy for nearly a year now. They met while filming Midnight in the Switchgrass at the beginning of 2020. However, they didn’t go public with their relationship until the end of May 2020, after Megan confirmed that she had split from her husband, Brian Austin Green. “MGK worships the ground [Megan] walks on,” an insider told HollywoodLife. “He’s fallen hard and she loves that. He would marry her in a second.”