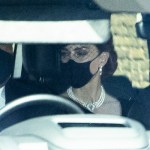 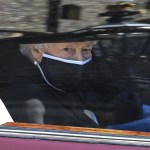 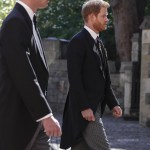 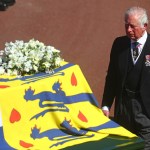 Meghan Markle watched Prince Philip’s funeral from home in California after not being cleared to travel during her current pregnancy, but she made sure to send a gift to the royal family ahead of the service.

Meghan Markle, 39, was unfortunately unable to attend Prince Philip‘s funeral at Windsor Castle on Apr. 17 but she made sure to let Queen Elizabeth II, 94, and the rest of the royal family know she was thinking of him at this time with a special gift. The Duchess of Sussex, who watched the funeral from her home in Santa Barbara, CA after her doctor advised her not to travel at the current stage of her second pregnancy, sent over a wreath and a handwritten note, Vanity Fair reported. The wreath, which was full of a variety of locally sourced flowers, was laid for the Duke of Edinburgh during his ceremony on Saturday.

The outlet also reported that Meghan’s husband Prince Harry, 36, who flew to the UK earlier this week after his grandfather died at the age of 99 on Apr. 9, also helped pick out the thoughtful wreath and it was full of special meaning. It was designed by Willow Crossley, who worked with the couple on the flower arrangements for their wedding in 2018 as well as for their son Archie‘s christening and the launch of the Hubb Community cookbook. They also specifically requested for it to include Acanthus mollis (Bear’s breeches), the national flower of Greece, to represent Prince Philip’s heritage, and eryngium (sea holly), to represent the Royal Marines.

The wreath also featured campanula, which represents gratitude and everlasting love, lavender for devotion, rosemary for remembrance, and roses in honor Prince Philip’s birth month, June. The card that came with the wreath was handwritten by Meghan.

The sweet gift comes in the midst of Harry’s first visit back to England since he and Meghan left the country after stepping down from their royal duties. It also comes just over a month after their shocking interview with Oprah Winfrey about their experience and struggles with royal life aired. The Duke of Sussex was one of only 30 people who attended Prince Philip’s funeral due to the COVID-19 pandemic, and was seen walking behind the coffin of the late royal along with his brother Prince William, 38.

Harry’s father Prince Charles, 72, who is Prince Philip’s son, and his sister-in-law Kate Middleton, 39, were also part of the funeral, which took place at St. George’s Chapel