If one spends a few minutes talking with Gavin Leatherwood, it won’t take long to discover him charming, brimming with confidence, but still grounded enough to enjoy the simple pleasures in life. In the twilight chit-chat, the preamble small talk before his interview with HollywoodLife, he relays how “the highlight of my weekend” was ice cream and a film. “A delicious waffle cone, sugared waffle cone, caramel and chocolate. It was excellent. Watched a movie. 20th Century Women. Shed a tear. Beautiful. Probably the highlight of my weekend.” He speaks with such warm assuredness that it’s hard to think anything could unnerve him, but “confidence” is not what he says he felt when it came to “Just For Tonight.”

“Absolutely excited. Fear, too.” Under the moniker Leatherwood, he released his debut single earlier in the year and unveiled this new facet of his creative side. In “Just For Tonight,” listeners found a shining star of alt-rock, glimmering in the sonic constellations of Turn On The Bright Lights and This Is It. It’s a stirring debut, piquing interests as to what’s yet to come.

“My joy really comes from creating and to release the things, to share the things,” says Gavin, “it’s almost like you’re casting a little baby out into the —  a fun, upbeat little baby.” Leatherwood shares that though “Just For Tonight” was written “pretty quickly,” it took him a moment to come to terms with this first impression. “For a long time, I thought that music was supposed to solve all the problems of the universe in four minutes or so,” he says, showing a punk sensibility that would make a Ramone beam with pride. “And with this song, I just sort of realized that songs can also just really be fun. There are other songs in which I try to capture some of that on the album. But this was, it’s just my baby. ‘Just like go out and have fun in the world.’” 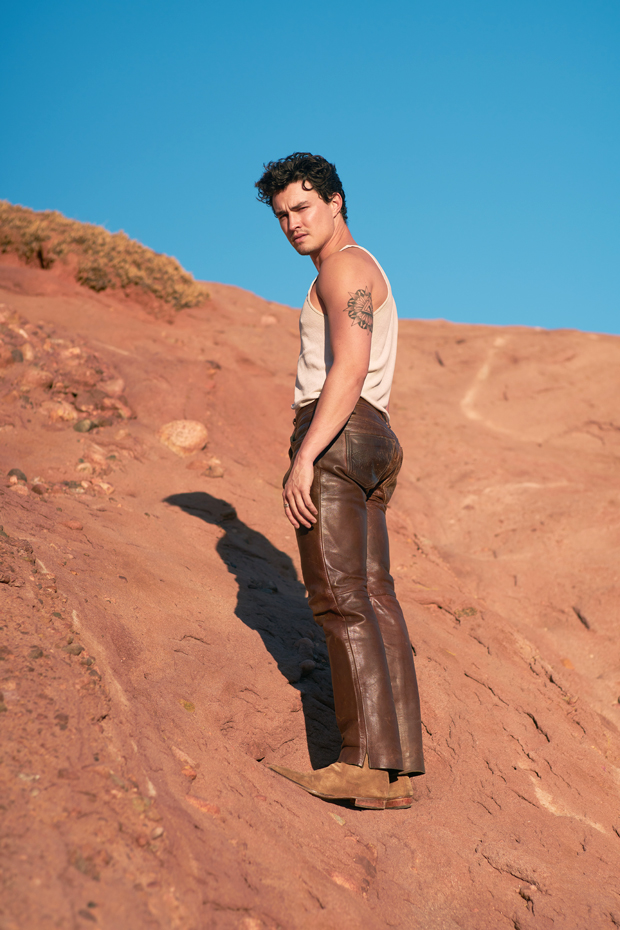 “So this feels good. I’m excited that people are listening to it and reaching out and saying nice things,” he adds. Though many will know Gavin from his tenure on the Chilling Adventures of Sabrina, this musical side existed before his acting days. Growing up around a lot of cousins who played music, he became a fast learner, picking up the guitar, ukulele, and piano. This love of creating music never went away, even as his acting career took off.

As to why he’s putting out an album in 2021? “It was just kind of like, why not?” he says, succinctly. “I think it’s kind of an interesting tango you have in yourself. Creating is one thing, and sharing is another. I have been sitting on music and felt like it was sort of gotten to a point where I began to fester. And releasing it, it’s something that feels good, to sort of rid yourself of the anxiety of holding onto something that would otherwise go unsaid. So I just said, pardon my French, but I just said, ‘f-ck it. Let’s just make it and put it out there.’ And whatever happens, not really up to me.”

Control plays an interesting role in Leatherwood’s songwriting. He acknowledges that there’s a little bit of sacrifice in the creative process. He says he wrote his forthcoming album from personal moments and experiences in his life. “I think music can sort of expand on it and zoom in on the moment and find microscopic details pertaining to your own perspective that other people might’ve missed, even if they share the same experience,” he says. “But, I really feel like writing from that perspective, that’s all we really have, our perspectives. With this music, and I’m just trying to share what’s on my mind.” 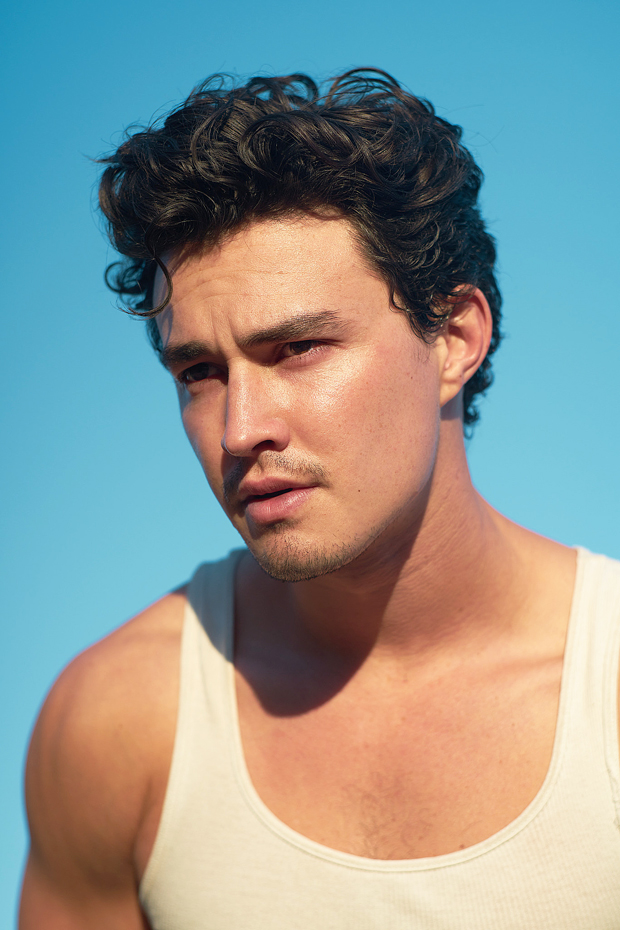 “Just like, I as a human in control, sometimes I’m upbeat and write a happy song and sometimes I’m down and write a down song, and sometimes I’m longing, and I’m just writing from what feels honest and going from there,” he continues.  “But the process changes all the time. Sometimes I wake up mumbling a song and humming a tune, and eventually, it turns into something. And sometimes, I’m fiddling intellectually chord shapes over and over until I want to bang my head against a wall. So, processes, frustrating and incredibly fulfilling.”

When comparing the “fulfilling” feeling of music and acting, Gavin references the organic nature of music, particularly the live performance. “I think the goal of artists is to express truth in some way and songs change all the time too,” he shares. “That’s something that’s really sort of lovely about music. Every time I play the song, it’s going to be different.” While live theater allows for similar improv and interpretation, recorded scenes are like that way forever.

It seems, from talking with Gavin, that Leatherwood is a project that’s meant to be experienced live. “The thing that’s lovely about it,” he says about music. “The reaction from friends and kind people, and you feel like you’re trending each word and line and not hiding anything. That’s where the joy really comes from. A lack of resistance and of permission, of honesty, and embracing the moment in each moment.”

And the most honest moment on his album? “I’d written a song for my father, six and a half minute long, called ‘Old Man.’ Not like Neil Young, but it just naturally happened. And while we were recording the vocals for the first time, I had my own emotional reactions. That was probably the most vulnerable moment with feeling the weight of the world and experiencing something.” 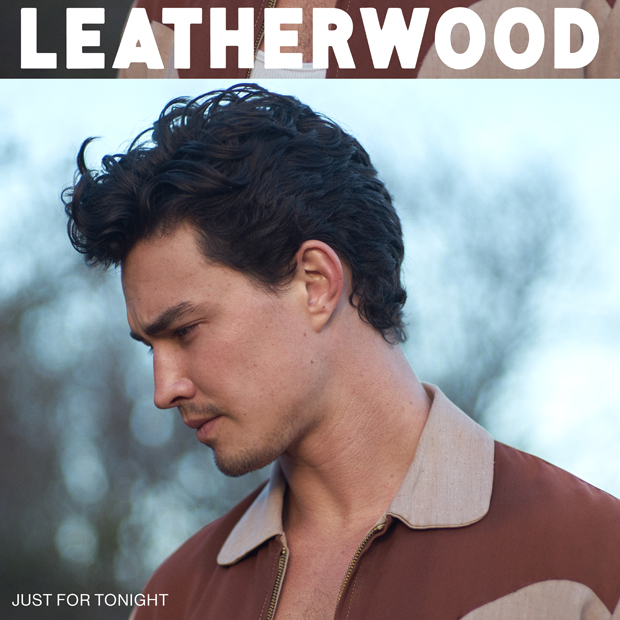 There will be many chances for everyone to have their own emotional experience on Leatherwood’s forthcoming album. While “Just For Tonight” showcases an alt-rock sound, the album “pulls from so many influences and integration,” he says. “There are some relatives and sister songs on the album, but it’s all over the place. You’ll somehow feel like they all work together at the same time. No, this album ranges from Pop and Rock and Folk and sensitive and song and life and truth and pain. It’s really a combination of my experiences and attempting to write it truthfully.”

And the truth that Gavin found from making this album? “Long of the short, maybe more aware of what my mission is, or something,” he says. “I feel like with anything that, you’re forced to strip back everything that was outside of yourself and entertain to some degree. You’re left with your own devices and what you do with that is really reflective of who you are. That just means spend my time making things. And I’m happy I was pushed into that.”

“Just For Tonight” is out now.