A social media user has spotted Britney Spears‘ mom Lynne in a Dallas bar, dancing and singing along to the pop star’s hit song “Toxic”. In an Instagram Story, the user zoomed in on Lynne, who was wearing a white blouse, black pants, a black jacket and boots. “Lynne Spears dancing to her daughters music at THE roundup,” the fan captioned the clip, tagging Texas’ Round-Up Saloon and Dance Hall. “Yes, that is her, I asked her,” the IG user clarified. When the video was reposted to Twitter, some labelled Lynne as “iconic” while many others were quick to note her behavior was irresponsible during a pandemic — especially given she wasn’t wearing a mask.

It comes just a couple of days after Britney responded to fans who raised concern about her social media activity. The pop star, who was the focus of the groundbreaking Framing Britney Spears documentary about her 13 year conservatorship battle with her dad, took to Instagram on March 18 to share a message. “This was yesterday  … nope not kidding wise a**es !!!! True f*****g story … it was yesterday !!!!!!” she captioned the carousel post, which featured a series of selfies wearing an off-the-shoulder blue and white crop top.

Nevertheless, some fans weren’t buying it. “Nah. I’m sorry Britney doesn’t cuss in her captions. Try again daddy spears,” one follower wrote, while another commented, “Ok but i still dont believe this, plus it looks like shes Been crying.” Although she’s been active on social media since the release of the documentary, Britney wasn’t physically seen until a recent outing on March 16. 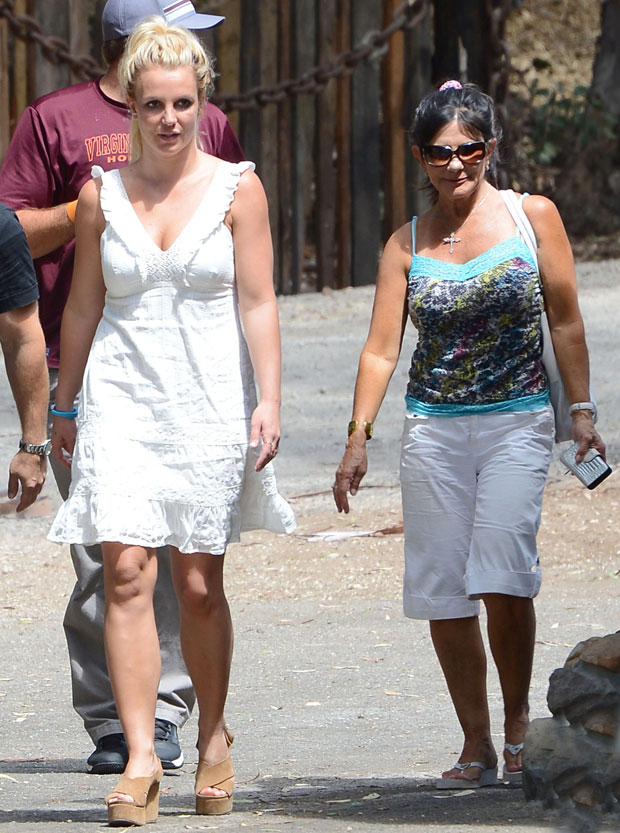 She stepped out for lunch at The Stonehaus in Westlake Village with her protective boyfriend Sam Asghari, 27, and her youngest son, Jayden James Federline. Britney cut a casual figure in a loose, light blue sweater and her tiny white shorts, which she frequently wears. Fans were also happy to see she kept her white protective face mask on, as the trio walked from the restaurant to the parking lot.