Billie Eilish has given fans their first glimpse of her new hair color! She took to Instagram on March 17 to debut her latest look — platinum blonde. “Can you guess what color?” she wrote on her IG story, before sharing a post to her feed of the new ‘do. “pinch me” she captioned the selfie, which showed her rocking bright blonde hair, styled in a fluffy blowout with curtain bangs. Billie wore a black hoodie in the snap, along with a beige bag around her chest, as she looked away from the camera.

“YES MAAM,” one fan commented, while thousands of others dropped fire and heart eye emojis. It comes just a few days after the 19-year-old hitmaker took home the award for Record of the Year at the 2021 Grammys. The pop star, who won just about every major award at the 2020 awards ceremony, continued her winning streak this year, and insisted on sharing the spotlight with fellow breakout artist, Megan Thee Stallion. “You deserve this. You had a year that I think is untoppable. You are a queen… Genuinely, this goes to her,” Billie said during the show, with her collaborator and big brother Finneas, 23, by her side.

“Can we just cheer for Megan Thee Stallion, please?” she added. Megan’s hit song “Savage” earned the artist three Grammys, including Best New Artist, Rap Song and Rap Performance. Nevertheless, it’s clear she was shocked by the shoutout! In true Billie form, she showed off her trademark unique style on the red carpet with super long nails matching her mask, hat, pants and top. 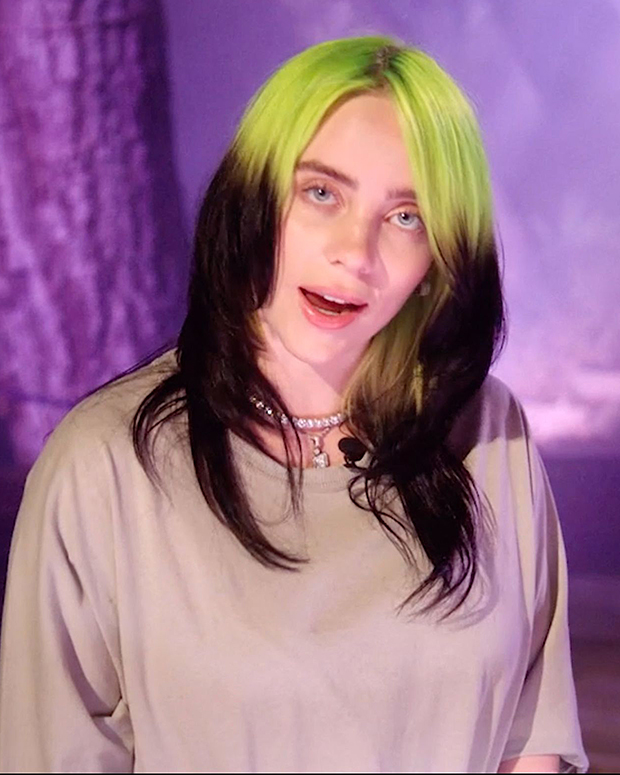 She later performed “Everything I Wanted” while rocking an oversized green top and pants adorned with diamonds. It’s clear the small crowd were loving the performance — even Harry Styles who was seen grooving to the song. Billie’s brother, Finneas, also played nearby on a keyboard, while wearing a very similar outfit.