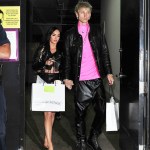 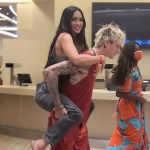 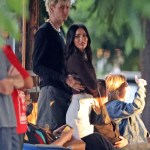 Machine Gun Kelly and Brian Austin Green ‘have gotten along great’ while hanging out together with the latter’s kids.

Brian Austin Green, 47, and Megan Fox, 34, are no longer together but it turns out her new boyfriend Machine Gun Kelly, 30, has been fitting in nicely when it comes to getting to know their three kids. The rapper has apparently been spending time with the former husband and wife‘s sons, Noah, 8, Bodhi, 7, and Journey, 4, as well as Brian, and the two men have been getting along nicely.

“Machine Gun Kelly and Brian Austin Green have spent time a decent amount of time together with the kids,” a source EXCLUSIVELY told HollywoodLife. “They have gotten along great. They’re not best friends or anything, but they’re very cordial and respectful of one another.”
“There have been no problems at all,” the source added. “It seems everyone is really starting to get on board and blend their families and the guys have been an integral part of this. There’s no drama whatsoever.”
MGK and Brian’s cordial ties come at the same time the former’s romance with Megan seems to be getting more serious. The actress filed for divorce from Brian in Nov. after the exes confirmed their split in May and her relationship with the “Bloody Valentine” creator was on display shortly after. In Oct., a previous source told us that the new couple had met each other’s kids, which also includes MGK’s daughter Casie, 11, and are “very serious” about their romance.
“It happened within recent months, and it went really great,” the insider EXCLUSIVELY told HollywoodLife, while also adding that Brian has “also met MGK, and he also knew him before they were dating.” It seems one of the reasons MGK and Megan wanted to meet each other’s families is because of their hopes for the future of their life together.
“[They] seem to want to elevate things to the next level at some point,” the source continued. “They don’t do anything without the other these days. They’re that connected.”