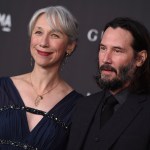 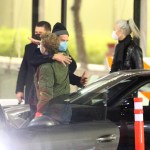 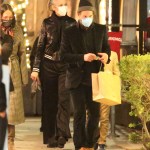 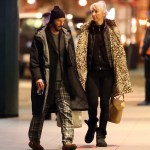 Keanu Reeves, 56, and Alexandra Grant, 47, proved their relationship is still going strong when they stepped out for their latest romantic outing. The actor and the beauty were seen walking outside Spago restaurant in Beverly Hills, CA on the evening of Mar. 13 after enjoying a meal from Wolfgang Puck‘s crew. They joined Keanu’s Bill & Ted’s Excellent Adventure co-star Alex Winter, 55, his wife Ramsey Ann Naito, 47, and his son Leroy Winter, 23, for the fun dinner and were dressed stylishly casual.

At one point during the sighting, Keanu gave Alex, who was wearing an olive green jacket, jeans, and a white face mask, a hug. The two recently teamed up after 29 years to reprise their roles as Bill and Ted in Bill & Ted Face the Music, which came out in 2020. Alexandra was standing next to them during the sweet hugging moment.

Keanu and Alexandra’s latest dinner date comes a few months after they were spotted numerous times during their stay in Berlin, Germany, where the hunk was filming The Matrix 4. The cute couple shared kisses whenever she said goodbye to him in a car so he could go on set to film in Oct. and they were seen occasionally spending quality time together at museums and restaurants. Although all eyes are on them whenever they step in the public eye, the happy duo tries to keep their relationship private for the most part.

Keanu and Alexandra made their red carpet couple debut at the LACMA Art + Film Gala in Los Angeles, CA in Nov. 2019. They had already been dating for two years at that point but kept their love under wraps.