There was a lot of Haim-shaped buzz going into the 63rd Annual Grammy Awards on Sunday (March 14.) Would the sister trio – Este Haim, 35, Danielle Haim, 32, and Alana Haim, 29 – take home the award for Best Album of the Year? Would they cement their claims of being an “f-cking rock band” by winning Best Rock Performance for “The Steps”? Would fellow-nominee Taylor Swift join them to perform “Gasoline” during the ceremony? What would they wear? The latter was answered on the red carpet. Though COVID-19 guidelines meant there were fewer photographers and reporters at the pre-show event, celebs still got to show off their fashions, including Haim.

The sisters coordinated their separate looks, each rocking a custom Prada outfit, each of a light-purple shade. Very chic. As for the performance, the sisters took their moment and ran with it.  The trio then did a quick costume change to perform their Grammy-nominated song, “The Steps.” It was a fiery burst of alt-rock fury, confirming that the future (of rock) is indeed female. The performance helped open up the show, following’s Billie Eilish‘s performance of “Everything I Wanted” and Harry Styles‘s moody performance of “Watermelon Sugar.” Haim helped closed out the first set, and the sisters got everyone dancing — including Harry and host Trevor Noah!

“We’re so happy to see that everybody nominated in the rock performance category as a woman. It’s f-cking awesome,” Alana Haim told Variety in November 2020, after the nominations were announced. “For us from the jump, if we could get one girl to pick up a guitar, pick up the bass, pick up the drums or any instrument, feel comfortable and just be like, ‘I’m in the rock f-cking community’ — we’ve always felt like that’s the most important thing.” 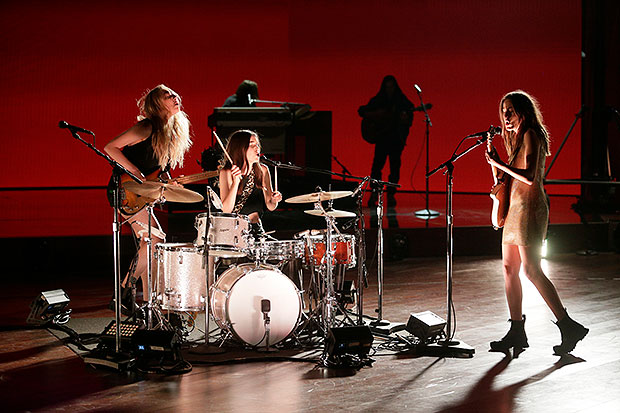 “We never really fit a genre, but I will say that we’re a f-cking rock band,” added Alana. “We’re a touring rock band, and we’ve always felt like we were a touring rock band.” Her sister Este added, “We can’t really be put in a box, which I think is cool. And clearly, we’re doing our own thing and making the music we want to make. What is genre anymore, right?”

“[F]or us making this album, we really just went into it because we just had so much to talk about,” added Danielle. “It was really like more of a version of therapy for us. Making it, the only thoughts that were going through our mind were: ‘What is going on in our brains?’ And: ‘How are we going to tour this album?’ Those were the two main things. I mean, we’re a rock band, and that’s why we couldn’t wait to tour this album. And because of COVID, we couldn’t. But we just had a lot to talk about after touring for over 10 years. And we came together and made this record and never thought anything of it, other than the fact that, shit, we have a lot of things to get off our minds. So that was really the vibe of this record.”