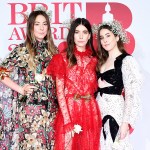 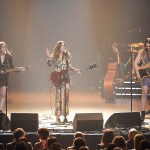 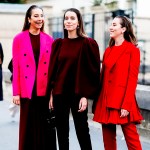 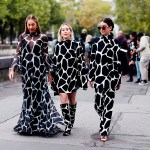 Learn more about sisters Este, Danielle and Alana Haim who are nominated for 2 Grammy Awards on Sunday night!

With back-to-back albums in 2020, Taylor Swift certainly provided some bright spots during a difficult year. The Grammy-winning singer debuted her indie-inspired album Folklore over the summer, and adding a surprise counterpart just months later. Evermore debuted on Dec. 11, and showcasing more collaborations for the songwriter — including one with sister-band Haim (pronounced Hi-em). The trio of sisters — Este, 34, Danielle, 31, and Alana, 29– make up the rock and roll band. Learn more about the highly talented trio who are also close friends of Taylor.

Haim is a family operation

The sisters come from a super musical family, and each began playing instruments when they were young. They had an early cover band called Rockinhaim, which also included their parents Moti and Donna. Haim was then formed in 2007, and became truly legit in 2013 with the release of their first album — Days Are Gone.

Although Days Are Gone wasn’t released until 2013, the songs had been written far before they ever made their way into the world. “We’d been sitting on those songs for years,” Danielle said to Rolling Stone in a June 2020 interview. “We were playing them in clubs in L.A. for the longest time before we got signed — we wrote ‘The Wire’ in 2008,” she revealed. By the time they released Women In Music Pt. III in 2020, however, the group began to embrace releasing more recently written music — including the tune “Summer Girl.” Danielle went on to reveal they’d “never written a song and then just decided a couple days later that we were going to release it into the world.”

The sisters have a tight bond, and that’s only been strengthened through their music over the years. “We’ve always been a three-woman show,” Alana, the eldest, said in an interview to Coupe de Main magazine. “We’ve always been the CEOs of our company. And honestly, all we need from the people around is just support,” the 34-year-old confidently added.

Haim could be going home with a Grammy on Sunday, March 14! The trio were confirmed to be nominated in two major categories for the upcoming ceremony, earning nods in Best Rock Performance for their track “The Steps” and earned a coveted nomination for Album of the Year for Women In Music Pt. III. Notably, Haim was first nominated for Best New Artist in 2015, though they lost to Sam Smith.

The recent nods mean the group already made history as the first all-female rock band nominated for Album of the Year — which is considered the biggest award of the night. “Whether we win or lose, there will be a lot of tequila happening,” Alana said in an interview with AP ahead of the big night. “(It’s) surreal and I also feel like it’s a long time coming,” Este Haim added of the history-making moment, while Alana reflected on the tour the group had planned pre-pandemic.

“I mean, my body is ready to go on tour and to play live and to play these songs,” she youngest sister said. Danielle revealed it was “bittersweet to bring the record out into the world when we couldn’t actually go out and tour it.” Here’s to a tour post-pandemic!

They’ve collaborated with Taylor before

Before collaborating on Taylor’s track “No body, No crime,” the sisters opened up for Taylor during her 1989 World Tour in 2015. Haim performed before Taylor during her stops in Washington D.C., Chicago, Los Angeles, Nashville, and St. Louis, among other cities. The sisters were practically members of Taylor’s “squad” by the end of the tour.

“We’ve jumped on a lot of people’s songs during our career, and it was always in person because there wasn’t a pandemic,” said Alana in an interview on March 10, 2021. “It’s actually kind of exciting because I feel like we all, as musicians, kind of had to figure out all of our home studios pretty quickly,” she added. The murder mystery themed song (think Law & Order: SVU — one of Taylor’s favorite shows — but in a song) peaked at number 34 on the Billboard Hot 100 and number 2 on the country charts.

Taylor also made an appearance on Haim’s remixed track “Gasoline” from their most recent album, which dropped in Feb. 2021. “She just added such an amazing new facet to the song and it really is like a remix,” said Este said of her close friend. “[Taylor] really brought a whole new layer of imagery to the song as well…maybe in the future, this is just what’s going to come out of it — more collaborations because we’ve figured out how to create.” We certainly hope so!

Their latest album was called one of the best of 2020

They’ve worked with an Oscar-nominated director

The sisters’ stylish, vivid visual accompaniments to their tracks are often directed by Oscar-nominated filmmaker Paul Thomas Anderson. Thus far, the trio has worked with PTA on eight of their music videos between 2017 and 2020, including “Little Of Your Love” from the band’s second album Something To Tell You, which you can watch above.