Rapper Boosie Badazz has apparently been giving 24-year-old model Lori Harvey‘s impressive love life of famous men plenty of thought. The 38-year-old was interviewed by VladTV on Feb. 15, where he ran through her list of high profile rapper exes, then called Lori’s very proud boyfriend Michael B. Jordan a “simp” for his over the top romantic treatment of his lady. DJ Vlad brought up Lori’s “body count,” which reportedly includes exes Future, Trey Songz, Diddy, his son Justin Combs and Akon‘s brother, music manager Buu.

“A lot of rappers want her because a lot of big dogs want her on their wish list. You gotta give the bachelors credit. People act like they fallin’, but nobody’s stuck. You only gonna stuck cause once you been ran through like that, you’re only gonna catch a simp, you ain’t gonna catch no street,” Boosie declared. Urban Dictionary defines as simp as “someone who does way too much for a person they like.” 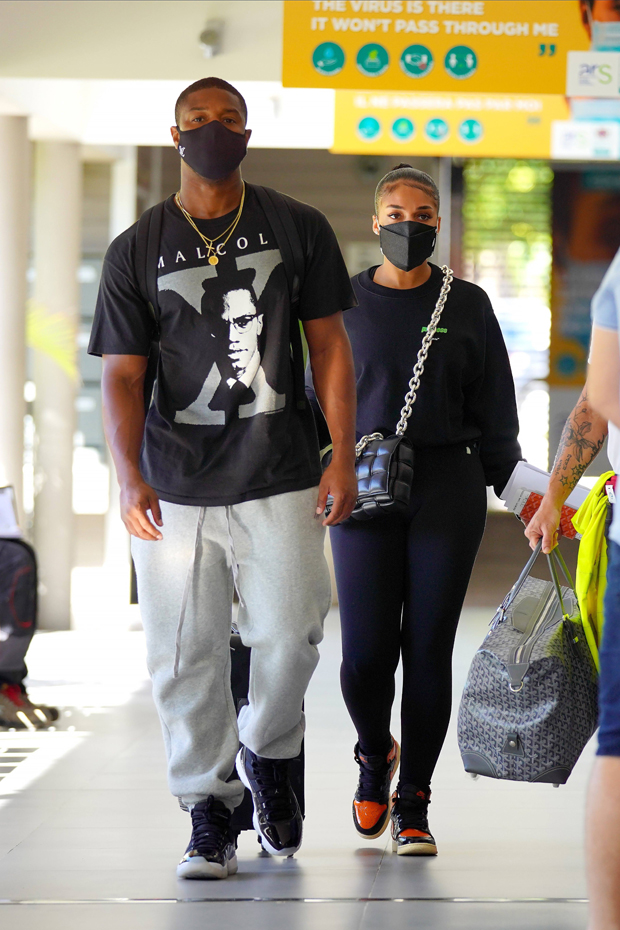 Vlad then reminded him, “Well she got Michael B. Jordan, he’s a pretty famous actor. I mean, is he the biggest black actor in Hollywood right now?” Boosie then replied, “But that’s what kinda dude you’re going to get.” Vlad continued, “As a leading man, who is bigger than Michael B. Jordan right now?” and Boosie had to admit, “Nobody.”

“He’s claiming her. They’re taking pictures together,” Vlad explained, while Boosie said, “I told you she’s gonna get a guy like that.” “Not a street guy?” Vlad asked, while Boosie responded “But a guy like that. That’s who’s gonna marry her. They look good together too. That’s the kind of guy who would marry her, you know what I’m saying?” Boosie went on to say that he’d never consider marrying Lori, as he wants a “beautiful, good girl” for a wife.

Fans on Twitter took Boosie to task for his comments about calling Michael a simp and how Lori isn’t wife-worthy. User @eastrichh tweeted, “Boosie got 6 baby mothers talkin bout Lori Harvey ain’t wife material,” while @Hazel_i shared, “Boosie saying he wouldn’t marry Lori Harvey like he would even be an option to her is the most delusional thing I’ve read all week.” @BrujeriaSiempre noted, “Boosie is 38 with 8 children, 6 babymothers and diabetes. 24 year old Lori Harvey should be the least of his worries.”

Boosie is 38 with 8 children, 6 babymothers and diabetes
24 year old Lori Harvey should be the least of his worries https://t.co/DFdBgexbEB

Boosie said Michael B. Jordan was corny but in the same breath said he was probably the most successful young Black actor right now. pic.twitter.com/mzlIoWm2xM

@PenajaAgain asked, “Does Boosie think him or someone similar to him is a catch OVER MICHAEL B JORDAN??????” while
@Marassta tweeted, “Imagine being Boosie referring to Michael B. Jordan as ‘a guy like that’ with underlying negative connotations.” However, one user @MrBucNRight thought Boosie was being misunderstood, tweeting, “Boosie didn’t call Michael B Jordan a simp. He’s just called him the overall good guy compared to the others she been with. We all know those guys, the one your parents love, if you we’re to settle down. The one that’s gonna do right by you.”

Lori shared Michael’s over the top Valentine’s Day celebration for her in her Instagram stories on Feb. 15. Despite just confirming that they are a couple on Jan. 11, the Creed star rented out a private aquarium where rose petals let to their romantic dinner table as sea creatures swam all around them. She also showed off her gifts from Michael, including multiple Cartier love bracelets and even shares of Hermes stock. Lori then posted IG stories videos of their hotel suite, with candles and roses everywhere, including on their bed along with a freshly drawn bubble bath waiting for them. Boosie can call that a “simp” all he wants, but Michael treated Lori like an absolute princess for the holiday celebrating love! That’s next level romance.