New couple Harry Styles, 27, and Olivia Wilde, 36, have just finished filming Don’t Worry, Darling — and Olivia has gushed about the singer-turned-actor’s performance on set. She shared a snap to Instagram on February 15, which showed the former One Direction star looking suave in a 1950s-style ‘fit. “Little known fact: most male actors don’t want to play supporting roles in female-led films,” she wrote in her caption. “The industry has raised them to believe it lessens their power to accept these roles, which is one of the reasons it’s so hard to get financing for movies focusing on female stories.”

She continued, “Enter: [Harry Styles], our “Jack”. Not only did he relish the opportunity to allow for the brilliant Florence Pugh to hold center stage as our “Alice”, but he infused every scene with a nuanced sense of humanity.” Olivia also said Harry blew everyone away, “with his talent, warmth, and ability to drive backwards.” The post comes one day after they rocked matching white hoodies in a group photo posted by co-star Asif Ali. The couple wrapped their arms around each other and smiled as they posed alongside leading lady Florence, and comedian Nick Kroll.

Harry rocked a blue New York Yankees baseball jacket with brown checked pants, as he removed his white protective face mask and smiled for the photo. Olivia also looked stylish in a black jacket with cropped trousers and white sneakers as she tied her highlighted locks back into a top knot. 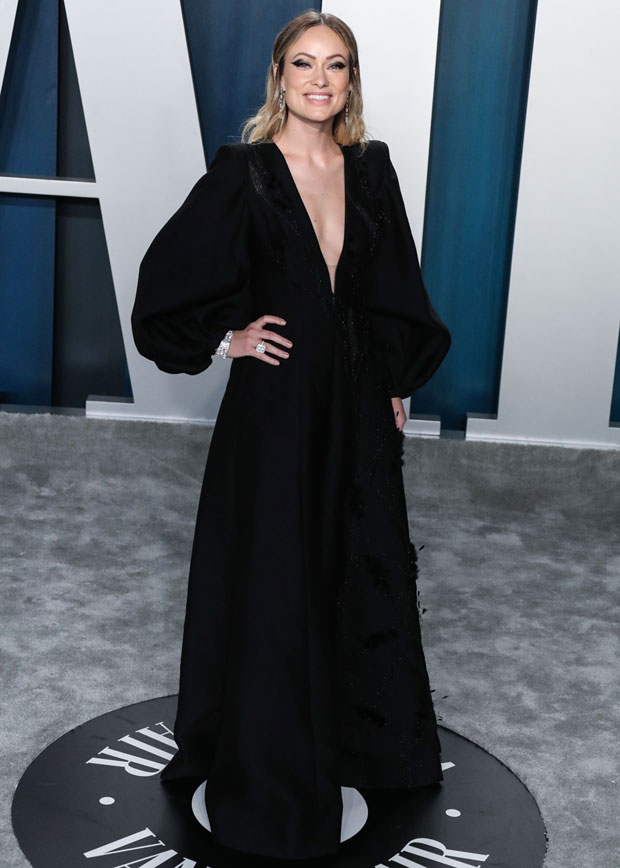 Olivia’s gushing post comes amid new videos, which show the actor-turned-director packing up suitcases into her car. The “Booksmart” director was seen moving bags from the home she used to share with ex-fiancé Jason Sudeikis, on February 14 — see the video here. While some speculated that she was moving into Harry’s place, it was unclear exactly where she was going. The new couple first made their relationship public after putting on a sweet display of PDA at a wedding for Harry’s agent in Montecito on January 3.