Meet the new life of the ‘party.’ In ‘WANNIT ALL,’ alt-hip hop star MRXTY THE PXRTY delivers the theme song for those who are hustling for ‘the pleasure, the fame, the Black card’ and everything in between.

Let’s face it – who doesn’t want everything? The luxury car, the Gucci shades, the top-shelf life. The question is, then who’s brave enough to admit it? And who’s willing to work for it? For those who said “yes” to both, MXRTY THE PXRTY sings this song for you. “WANNIT ALL,” premiering here on HollywoodLife, is the debut track from the Angelino rapper, an song for those who have their sights set on the top, even if they’re starting at the bottom. “You’re all prawns / new big fish in the pond,” he raps, “forever a latchkey kid / and yeah, I f-cking want it.”

For most of the video, MXRTY is alone in an industrial warehouse, rapping with either a bright light glowing behind his back or with projections of the city illuminated against his face. Though likely an accommodation for COVID-19, the sparse arrangement amplifies the message at the heart of “WANNIT ALL.” MXRTY lacks the accouterments commonly associated with a rap video – the Lambo, the drip, the rented mansion in the Hills, the half-dozen naked women – which only sharpens his desire to acquire those things. 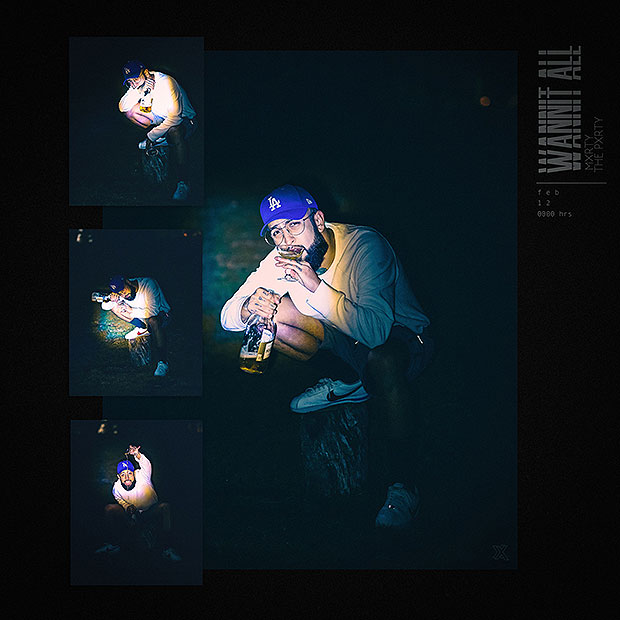 “WANNIT ALL” is my debut track!” MXRTY tells HollywoodLife. “It’s an anthem for any individual who has grinded their whole life and never gave up with massive unapologetic aspirations. In collaboration with longtime friend and producer Steve Wilmot, we teamed up to create a powerful, groovy bop with a chorus you’ll be singing with conviction throughout the day.”

“MXRTY THE PXRTY is a poet and an innovator,” producer Steve Wilmot tells HollywoodLife. “His creative energy, his wit, and his fearlessness make him an unstoppable force in the studio. He’ll be exploding out of everyone’s headphones whether they’re prepared for him or not.”

“I really wanted some eye-catching visuals for the video,” adds MXRTY. “I’m talking weird projections, bright moving lights, and artistic colors. I was fortunate to get to work with Sean Sweetman, and not only did he make all of those things happen, but he literally put me inside of a digital world like a video game (and not like Tim & Eric!) You would have to watch the video 100 times to see how much detail went into the visuals. Couldn’t be more stoked, it’s f-cking stunning!”

MXRTY THE PXRTY is the project of Angelino rapper Martin Dovali. Citing Tyler, the Creator, Mac Miller, and Anderson .Paak as influences, MXRTY THE PXRTY promises to bring a “high energy artistic expression and androgynous performance style” to his “weird, sensuous, and inspiring music.” So, better get ready, because the “pxrty” is just getting started.