In her new Facebook series Cardi Tries, Cardi B  has shown that she’s up for learning any type of new job. She’s already managed to teach a nursery school class about the science of pooping, and now she’s trying her hand at farming and ranching. In a new video released on Feb. 11, Cardi explained at the start “I really want to have a farm,” while decked out in brown leather cowboy had and matching cropped leather jacket with fringe. She claimed to want to build a small farm on her Atlanta mansion’s property that she owns with husband Offset. But she said he was against it, as Cardi said he believed all of the farm animals would make their place smell terrible.

Cardi headed to a working ranch in Atladena, CA just outside Los Angeles. When she reiterated her desire to own a farm — or at least give it a try to see if she enjoyed ranch life — her stylist asked Kollin Carter asked “You think you’re going to be able to deal with that smell?” The “WAP” rapper fired back with such a Cardi answer, replying “I mean how back could a smell be? Have you smelled my farts?’ Kollin agreed there was nothing worse than Cardi’s own bodily emissions.

Cardi met up with Texas-born country singer Mickey Guyton for their adventure in ranching. Their agenda included learning how to ride a horse, sheer a sheep, milk a cow and feed pigs. “Whew, does it smell like this always?” Cardi exclaimed as they were brought to the horse paddocks. “I hate when my husband is right because the smell…Ooh funkalicious!” Cardi successfully rode a horse with the assistance of a ranch hand, but was terrified by the experience and decided against having any horses on her future farm.

Cardi next tried shearing the wool off of a sheep named “America,” which went relatively well. “I really want one of these. I wouldn’t mind having one of these in my home. And I think my daughter would love her,” referring to her two-year-old little girl Kulture Kiari Cephus. “America, give me a baby and I’ll take it home with me. It’ll be my first sheep ever,” she told the creature. 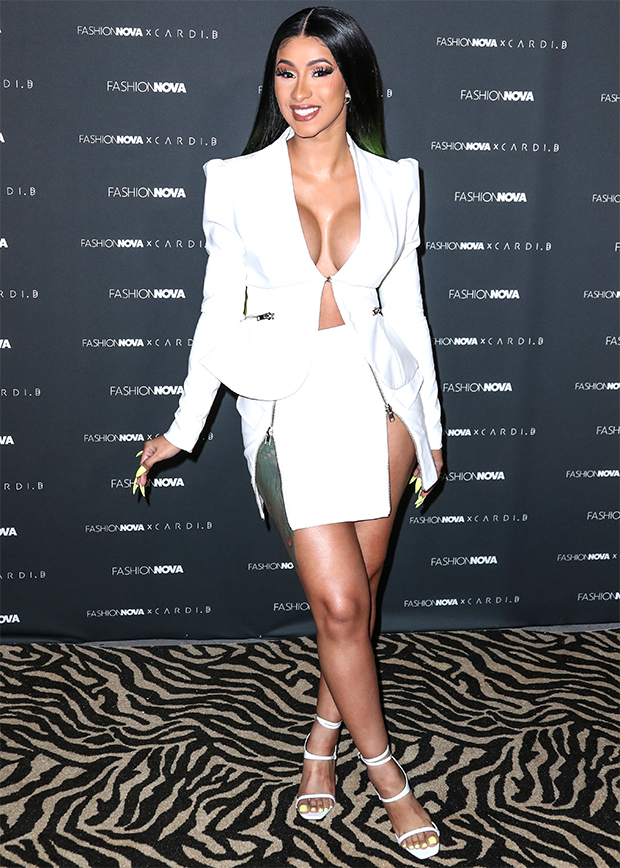 Cardi B is more at home on red carpets than milking cows. She’s seen here at the Fashion Nova x Cardi B Collection launch party held at the Hollywood Palladium on May 8, 2019. Photo credit: Mega.

Cardi quickly learned that the “slop” was “last week’s lunch and dinner” which the rancher explained was going to be fed to the pigs. The smell caused her to gag, but things got worse inside the pig pen. While she thought the creatures were cute, Cardi winced and claimed “It smells like garbage in here!” She then asked “By chance, are there any pigs out there that don’t eat garbage?” Cardi explained that while she found the critters adorable, “They’re so stinky and aggressive! They would run over my daughter!” So a farm isn’t in the cards for Cardi and her family. But it sure was fun watching the rap superstar be so game as to try out a day of ranch duties.