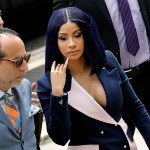 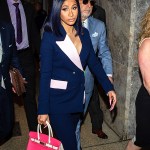 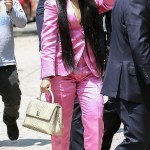 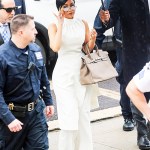 Cardi B went off on a Twitter rant after fans of Travis Scott’s claimed she didn’t deserve her Best Rap Album Grammy. She slammed critics in fiery tweets and explained the hardships she went through to get her album finished.

Cardi B found herself on the defense after the release of Travis Scott‘s new Netflix documentary, Look Mom I Can Fly. During one scene in the newly released doc, the “SICKO MODE” rapper is seen looking visibly discouraged while backstage at the Grammys in February when his album, Astroworld lost to Invasion of Privacy, Cardi’s multiplatinum debut album. Fans of the rapper then took to Twitter to claim that Cardi shouldn’t have won her Best Rap Album Grammy, and that she “didn’t deserve” the award. — That’s when Cardi hit back in a series of tweets.

“On my album I showed different sides of me. From my intro talking about my http://pass. To living my best life inspiring people. Relationship songs while I was going thru my own relationship drama to shaking ass like Bodak & that ASS. Every song went platinum!”, she wrote in her first tweet.

“I did it all while I was pregnant. Throwing up, drowsy, terrible colds and in a rush to finish it so I can start doing music videos before I started showing,” Cardi’s second tweet read. “I spend 24 hours for months sleeping on a couch with my pregnant depressed ass in a studio.”

On my album I showed different sides of me.From my intro talking about my https://t.co/xSGBV4duiP living my best life inspiring people.Relationship songs while I was going thru my own relationship drama to shaking ass like Bodak & that ASS .Every song went platinum!

I did it all while I was pregnant.Throwing up, drowsy,terrible colds and in a rush to finish it so I can start doing music videos before I started showing .I spend 24 hours for months sleeping on a couch with my pregnant depressed ass in a studio .

The “Press” rapper went on to explain that the Grammys weren’t even a thought when she was working on her first album due to her high profile pregnancy and the backlash that came with that. “I wasn’t even thinking of winning or even the Grammys. All I can think about was …everybody is disappointed in me,” she tweeted, recalling, “Am I still going to have a career after this baby? Is this album going to make me or break me? I need to finish before I start showing.”

Cardi also revealed that husband Offset stepped in to help her with her management. “All while I just separated from my long time manager. I had to get my husband to talk to my label cause I never had a relationship with them so we all came together to relocate me to Atlanta and Miami to finish my album before my stomach start showing,” she explained in a fourth tweet.

Cardi then admitted that there were some artists who had a hefty price tag for features on her album. “When I kept seeing the certifications of the songs going gold or platinum I was so excited cause my husband was out here asking everybody for a feature on my behalf so the ones that said yes thank you from the bottom of my heart cause TRUST ME ALOT OF ARTIST SAID NO! OR CHARGING 6 figures for a feature,” she tweeted.

“So when I won a Grammy for it I didn’t have no words to say but when I went home I started reminiscing on what I went thru during that period I was like YEA BITCH YOU DESERVE THIS SH-T!”, Cardi said, admitting, “And until this day my shit still charting.”

After fans continued to send vicious tweets to the rapper, Cardi reminded critics that she supported Travis during Astroworld‘s debut. “Ya some grown ass men talking about dragging Cardi cause I won an award for a bomb ass album. Mind you I myself promoted ‘Astroworld’ on my page when it came out and have a good relationship with Trav while ya some small dick men talking bout dragging a girl.”