Football legend and Fox Sports commentator Terry Bradshaw is featured in yet another Super Bowl commercial for Frito-Lay and he is bringing all the laughs alongside his fellow football stars, like Jerome Bettis, Troy Aikman, Joe Montana, Peyton and Eli Manning and Deion Sanders. In speaking to HollywoodLife.com in an EXCLUSIVE interview ahead of game day, Terry dished on whether the Kansas City Chiefs or Tampa Bay Buccaneers would be taking home the Vince Lombardi Trophy and the hilarious reason he made his prediction!

“Being happily married is important to me, so I’m going to pull for my wife’s guy — the young GOAT, Patrick Mahomes,” Terry admitted, announcing he’s pulling for the Chiefs. “I saw Patrick, two years ago, and I got an autograph helmet for my wife, and she sleeps with it by the bed. Little upsetting.” He added, “Do I care who wins? No. If Tom [Brady] wins, I just think you know what, he’s already got two more than me. Get three, get four doesn’t matter. Right?”

Speaking of Brady, there has been much discussion this season if his success at Tampa Bay is evidence that he was single-handedly carrying the New England Patriots for all of those years. “Tom went to Tampa Bay because, first of all, the coach, who’s an offensive coach, and the quarterbacks that he has coached and had under his tutelage. And then the fact that Tom would go down there and say, ‘Ok, I need this, I need that.’ That’s why Rob Gronkowski is there. That’s why Antonio Brown is there. That’s why the offense has evolved to Tom’s offense,” the former Pittsburgh Steelers star QB told HL. “I do believe that one of the driving forces which will never be admitted publicly, is that Tom got tired of hearing it was Bill Belichick and he wanted everybody to know it was Tom.”

Terry added, “I don’t understand why people have to have an ego that gets involved in something like this. Did I want to go somewhere and prove that I was the reason we won in Pittsburgh when I knew damn good and well I wasn’t? I was just part of it. I was just one of the pieces of the puzzle. An important one, but not the most important.” 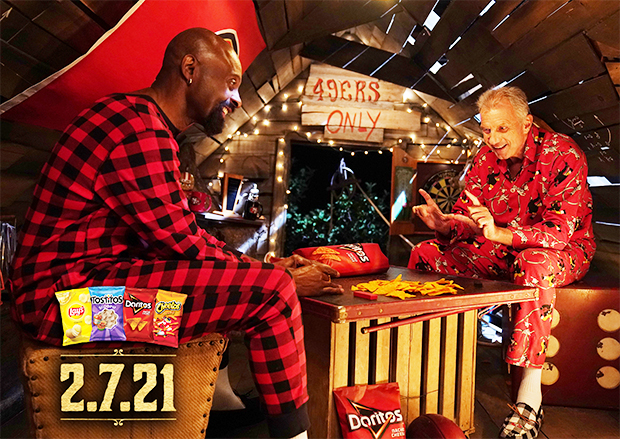 The four-time Super Bowl champ plays into this mentality in the Frito-Lay Super Bowl commercial, which is set to show just before the coin toss on Sunday, and will be his fourth time featured in one of the brand’s game day spots! “I’m arguing that The Immaculate Reception, which has been voted once again the greatest play in the history of the NFL — I threw the ball, and I’m arguing that that was the most important part,” Terry explained. In the hilarious commercial, he then attempts The Immaculate Reception, this time as the receiver. Be sure you don’t miss “‘Twas the Night Before Super Bowl” on Sunday before the big game!