Britney Spears decided to share with fans what her primary goals are that she wants to accomplish in 2021. The 39-year-old appeared in a video on her Instagram page on Feb. 2, while dressed in a low cut, short-sleeved black crop top and very tiny low-rise black shorts. The singer chose a pair of low black pumps as her footwear, and appeared to have had her extensions put back in, as her shoulder length bob is gone and now replaced by long locks cascading from a messy high pony tail.

Britney could be seen in the foyer leading to her living room in her Thousand Oaks, CA mansion, which is the site of where she does so many of her Instagram dance videos. The “Slumber Party” singer seemed little nervous as she said, “So I heard a lot of you guys are writing in and you want to know what my main goals are for 2021.”

Before each item, Britney seemed to look off camera to her right. “Number one is to meditate more,” the mom of two proclaimed. “Number two is to take a cooking class. Number three is to do a pilates class and actually follow through with the class,” she continued, joking, “And number four is I’ve got to try this ice cream diet.” What? There’s an ice cream diet? 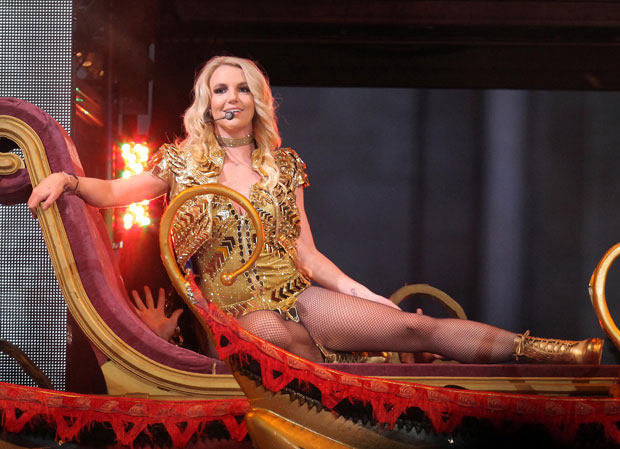 Britney’s wording concerned some fans, and various conspiracies arose. User @lisa_killian wrote, “She heard? This proves she does not see her account” while @smokahontas commented, “‘So I’ve heard a lot of you guys are writing in.’ She clearly has zero access to her social media accounts if she has to hear about and not read these questions herself.” Fan @fabulousmatty joked, “Wait, where can we write in? I have so many questions!” while user @clementine_ford told the former pop superstar, “Britney, we are all rooting for your freedom,” referring to her ongoing conservatorship battle with her dad Jamie Spears.

In the caption Britney wrote, “Decided to do another Q&A because I heard you all love them so much!!!! Also …. I realized I could have at least put on a little mascara or lip gloss… sorry it’s DEFINITELY a DIFFERENT look!!!! PS…I’m pretty skeptical of the ice cream diet.” To that, fan @taylormillerphoto assured her, “Natural Britney is my favorite Britney!!! You don’t need makeup!!” while @wefunz wrote, “all jokes aside, I’m glad that britney is telling us what her goals are. We are rooting for you!!” Brits fans really do care so deeply about the singer’s well being, that’s why they sometimes seem so concerned in the comments.