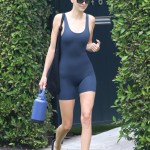 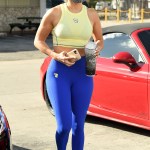 ‘Puppy pilates’! Hailey Baldwin slayed in a fitted pair of leggings and crop top as she worked up a sweat at a private studio.

Hailey Baldwin has been keeping up with her fitness routine in quarantine! The 24-year-old slayed as she showed off her intense pilates routine at Forma Pilates, a private studio in Los Angeles, on Friday, Jan. 15. Hailey showed off her toned body as she slide back-and-forth on a reformer with a blue resistance band around her legs. She was hilariously joined for the ride by her adorable dog Oscar, who sat on the equipment as she worked out. The blonde yorkie appeared a little confused as he looked around at the floor while in motion.

The BareMinerals model appeared to recreate yoga’s downward dog position on the reformer machine, working her core and toning her arms as she moved back and forth. Her posture looked perfect as she demonstrated the move in a fitted pair of grey leggings by Sculptflex. Keeping her blonde hair back in a high bun, she also shared some casual pre-workout snaps with Oscar before the session. “Dog or parrot?” she joked as she held her furry son in one hand. It appears Oscar wasn’t the only pup in class, as he popped up with another pooch in a photo captioned “Puppy pilates.” How cute!

The workout session comes fresh off of Hailey and husband Justin Bieber‘s jam packed getaway to Hawaii! The couple shared several photos from the trip, including snaps from a snorkeling excursion. Rocking a black Off-White bikini, Hailey looked all ready to go with her snorkel mask as she posed in front of the gorgeous blue water.

The action didn’t stop there as the duo — who tied the knot legally in 2018, then celebrated with their friends and family a year later — also got in some hikes. Hailey stunned in a fitted gray crop top and shorts as she posed in a gorgeous woodsy area with Justin. Of course, the couple also appeared to get some R&R as they lounged in the sun poolside before returning to Los Angeles.