“Hey,” says a beleaguered mom to her son at the start of Tide’s Super Bowl LV commercial. “You need to wash Jason Alexander hoodie.” Cut to a hoodie that…bears the likeness of the beloved television icon, as if this sweatshirt was some bizarre piece of Seinfeld merch. “Looks clean to me,” says the son, trying to get out of chores. “Is it, though?” asks the mom, and you know what that means: Cue the montage!

From there, Tide takes you on a journey of what a normal teen would do with a hoodie bearing the visage of the Duckman star (remember Duckman?) From being a drool rag for a pit bull to catching a loose leaf of lettuce while taking out the trash, to being a substitute third base in a game of baseball, the Jason Alexander hoodie has multiple uses. As Joey Scarbury’s “Theme From The Greatest American Hero (Believe It Or Not)” plays, this young lad shows just how many smelly, stinky, and slightly disgusting ways a Jason Alexander hoodie could pick up dirt, sweat, and grime. Ultimately, the teen’s mom – right as he’s about to wash the sweatshirt with Tide Hygienic Clean Heavy Duty 10x Detergent – says he “owes Jason Alexander Hoodie an apology.” Enter the real Jason Alexander to bring this hilarious — but really, heartwarming ad to a close. 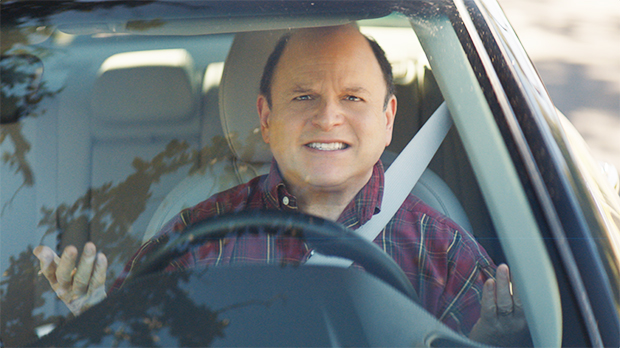 “We did some research on hoodies with celebrity faces on them,” says Daniel Lobatón, Chief Creative Officer of Saatchi & Saatchi NY, said in a statement to AdAge. “Turns out, there’s a weird combination of what makes these great. Ironic and iconic nostalgia is something we threw around in the creative department. Jason brings everything we were looking for in this story. He was amazing to work with and full of ideas of how we could make this funnier. He was so specific with his acting, giving us a range of emotions—for a hoodie.”

Tide is no stranger to getting strange with its Super Bowl ads. In 2020, Charlie Day of It’s Always Sunny In Philadelphia and Emily Hampshire of Schitt’s Creek – two of the most beloved oddball sitcoms in TV’s history – got a bit existential about the concept of “later.” Due to Emily’s enthusiasm, she got a stain on Charlie’s shirt, and he bemoaned how he had to do laundry. She told him to do it “later,” and, in a trademark Charlie Day manner, he…didn’t really grasp the concept.

Similarly to how David Harbour popped up in subsequent other commercials in 2018, Charlie – after deciding he would do laundry “later” – began appearing throughout other parts of the super bowl: in a Bud Light ad, ahead of a promo for The Masked Singer, and in the middle of a trailer for Wonder Woman 84…back when it was supposed to come out in 2020. We’ll have to see if Jason Alexander Hoodie continues this trend and shows up in a beer ad, or maybe in a commercial for Doritos.